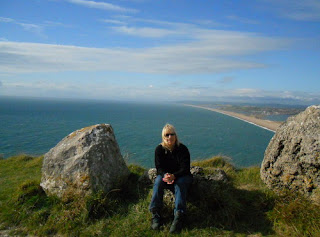 Last week I drove back to Weymouth for the day, for an interview with Ruth Meech of the Dorset Evening Echo.  She’s writing a piece about Stonewylde for the special Saturday paper, and hopes it’ll be out on Saturday 13th, one week before the book launch in Dorchester on Oct 20th.

After the interview, I went to visit a very good friend and we drove across to Portland for a walk.  You can see how blessed we were with the weather – it had been absolutely pouring on the drive down, with  so much spray on the motorway that visibility was dreadful.  But just look at that glorious blue sky in the photo!

We walked to Tout Quarry, which is actually the place that inspired me for Quarrycleave.  Tout Quarry is a disused quarry near Easton, and it’s been turned into a sculpture park.  It’s wild and natural – you just turn up and wander around.  It’s enormous and would take several hours to see all of it; it’s well worth the time. 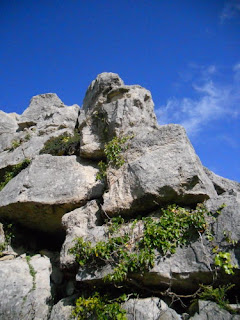 Tout Quarry is an amazing place, but it’s not the Place of Bones and Death that features in Stonewylde.  That idea came to me in a nightmare a long time ago and scared me so much that even many years on, it still frightens me.  But when I began constructing Quarrycleave in my imagination, it was Tout that kept popping up in my mind’s eye.  The boulders, the swarming ivy … 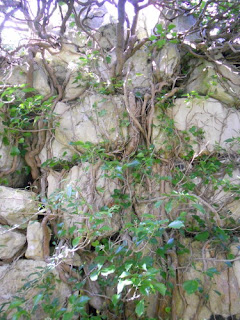 There are canyons of stone, dead ends, great blocks, hidden recesses.  And without wishing to put any spoilers in here, there’s a carving called “Still Falling” which had a profound effect on me.  I think of it often.  Can you see the falling man? 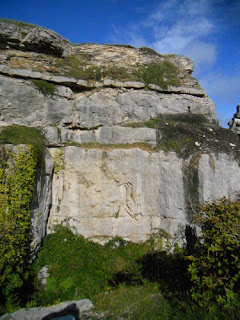 Tout is full of unusual carvings and sculptures.  It’s a strange place – not terrifying like Quarrycleave, but with a certain atmosphere that would definitely put me off visiting after dark.  Not exactly haunted or creepy, but not comfortable either.  And just look who’s crawling back up! 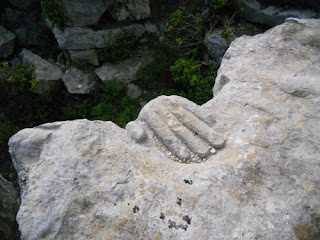