The Round Room – surrounded by Lenkiewicz’s art 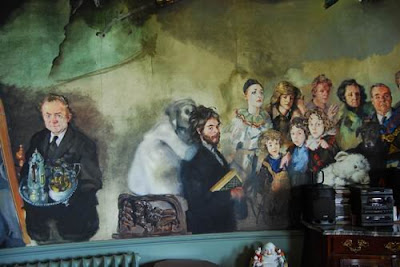 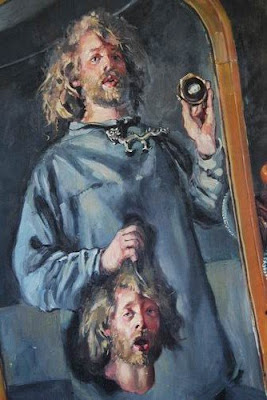 It’s almost impossible to describe the Round Room at Port Eliot. Great windows look out over the lawns and parkland beyond, letting in the light to illuminate the bizarre throng of characters that form a massive carousel. Robert Lenkiewicz painted a great mural here many years ago. One is surrounded by huge, realistic people, each one clearly telling a story or representing something, but without an explanation simply existing as an almost nightmarish cartoon. Death is clearly one of Lenkiewicz’s favourite themes, particularly his own.

It’s a large room, carpeted and with a gleaming motorbike against one wall. For the purpose of the festival it was filled with elegant chairs in neat rows, and a massive table. I found it overwhelming and my description here is not doing the amazing room justice, because I really couldn’t take it all in. Especially in my state of nervousness at the prospect of giving a talk here.

Normally when I speak to an audience it’s clear where to stand or in my case, perch, because if there’s a table I like to sit on that to address people. I’ve spoken in so many different places now. Countless village halls to many WI groups, schools, universities, racecourses, pavilions, town halls … the list goes on. But never anywhere like the Round Room at Port Eliot. The ranks of chairs all faced the centre of the room and this was where Caz helped me out.

“Where do I stand?” I asked nervously. “I don’t want my back to be to anyone.”

“Here,” she said, gently pulling me into the centre of the room under an absolutely enormous crystal chandelier.
“No, I don’t want to stand under that!” I said panicking, thinking of the Only Fools and Horses chandelier episode.
“Say something,” she said, so I did. “Now say it again.”
This time she’d put me directly underneath the beautiful crystal. Immediately my voice was amplified, softly yet completely. It was incredible.
“Where are the microphones?” I asked, peering up at crystal above me and almost losing my poppy and wheat head-dress as I craned my neck.
Caz laughed at this.
“It’s natural. Perfect buy phentermine philippines acoustics and part of the magic of this room. Just stand here and everyone will hear you perfectly.”

So I did, propping my huge poster of the Stonewylde Wheel of the Year against a chair next to me and the selection of corn-dollies I’d brought along from the gazebo. The room gradually filled with people coming to hear my talk, and the security people ejected all those who’d just come in to look at the paintings, including a large group of small children which was a relief, lovely though they were. I think they believed I was an extension of the exoticism of the whole room as they gazed at my golden ballgown, strangely in keeping with the surroundings despite it being a sunny Saturday lunchtime.

My talk went fairly well I think, given that I was so over-awed by my surroundings. I hope people enjoyed it as they’d chosen to come to hear me rather than the gracious Jung Chang, a lovely lady whom we’d met the previous evening at the drinks party. She’s a best-selling author most famous for her book “Wild Swans”, and represented pretty stiff competition!

It was a relief when the co-ordinators of the festival peeped into the room through the massive double doors and made winding down motions at me – events were non-stop all weekend with no leeway for over-running. I gathered up my dollies and wheel and made my exit, feeling relieved and in need of coffee. And sleep.

I’ve found an interesting article about the late Robert Lenkiewicz, who by all accounts was a completely larger than life character. Our own Cornmother who made me the dollies had sketches of her children done by him many years ago when he was scratching about trying to make a living. This article explains some of his exotic life. I felt him all around me in the Round Room and could only imagine the strangeness of him painting in there with his friend Peregrine, the Earl of St Germans, watching on.