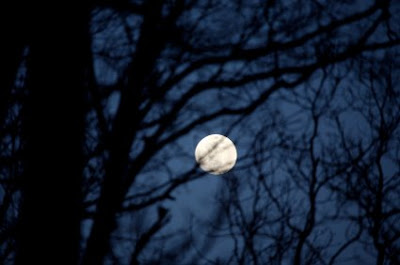 Tonight is the Owl Moon at Stonewylde. Readers of the books will know how the story of Stonewylde pivots on the pagan festivals and full moons (which some call Sabats and Esbats). When researching for the books, I came across many different names for each full moon, for it seems in earlier cultures time was measured by the moon’s cycle (hence the word “month”). Unsure of which names I should use and for fear of perhaps offending some people to whom these things really matter, I decided to make up my own names for some moons and only use the very commonly accepted ones for others.
This is what I used:

When there are thirteen moons in a year, the second one in the month is called the Blue Moon, and is considered to be very special. The next one will fall apparently on Dec 31st 2009. Tonight is the Owl Moon, and this is one of my favourites. The light outside is clear and silvery, bringing to mind that wonderful poem which inspired the opening line of the first book, Magus of Stonewylde,

Walks the night in her silver shoon …”Whether or not you call yourself a pagan, most people would surely describe the time of the full moon as magical. There’s so much folklore in different cultures about the full moon, and at Stonewylde it’s honoured by all as a time when the women are fertile. This ties in with the concept of the Triple Goddess – the moon as waxing (maiden), full (mother) and waning (crone). So the full moon is seen as a time of ripeness and fecundity, and in older times planting and harvesting best generic brand phentermine were done according to the moon calender.

Nowadays, with the growing interest in more alternative methods of healing and an understanding that maybe our ancestors did know more than we’ve given them credit for in the past century, perhaps it’s time to look at just how the full moon does affect our lives. We know the effect it has on the tides, and given that living things (ourselves included) are composed of so much water, maybe the full moon does make things a little different to other times of the month.

At Stonewylde the hares dance to the full moon, and this phenomenon has actually been documented for real. They also sit transfixed, staring up at the full moon, which I have called being “moongazy”. The first novel opens with the full moon rising over the city and Sylvie going frantic with a strange energy. This is contrasted with the moon rising over Stonewylde, where Yul sits with his back against a monolith and the hares around him, fighting back tears at the bitter injustice of his life. We discover as the story progresses that Sylvie is moongazy, and it’s only when she dances with the hares that she feels at last some relief from the apparent madness that has affected her for so many years. The word “lunacy” is derived from the fact that many people were affected by the full moon, and of course there’s the werewolf folklore too which plays on these fears.

Over the centuries the demonisation of pagan beliefs and folk customs has resulted in the full moon being associated with witchcraft, spells, bats and broomsticks. But tonight there are people all over the world who’ll be honouring the full moon, perhaps casting a circle and calling on the elemental forces which govern our planet. This is a potent night and everything will be charged by the unseen magic and power that appears every single month. This is the time to meditate, cast a spell or make a wish; the time to harness the power of intent and focus on the month ahead.

I called the November full moon the owl moon in honour of my aunt, to whom the Stonewylde Series is dedicated. I began writing Stonewylde five years ago in November as my aunt, who was in her eighties, was letting go of life. She died on November 29th and never read my books, but she would have loved them. I always called her my owl aunt, and when she died I inherited her collection of owls which now sit in my kitchen and watch unblinking over me. The Owl Moon is for my aunt, and in remembrance of her.