The Imaginarium of Doctor Parnassus – wow! 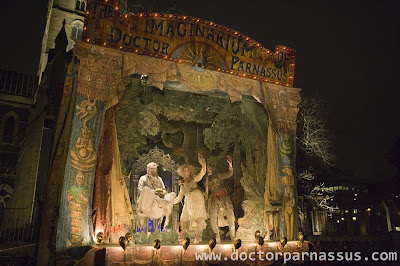 Publicity photo for the film

I don’t normally do film reviews on my blog and this isn’t really one as such because I’m not going to write clever and insightful things about a film. Or nasty and disparaging things either – that’s not why I blog. But last night Mr B and I went to see a film that so “blew my mind” that I felt today I had to share it with those of you who follow my blog.

The Imaginarium of Doctor Parnassus was written and directed by Terry Gilliam (of Monty Python fame) and starred many wonderful actors including Christopher Plummer, Tom Waits, Lily Cole, the late Heath Ledger, Johnny Depp (!!!!!), Jude Law, Colin Farrell and many more. Actually it doesn’t really star Johnny, Jude and Colin. They have cameo parts and were brought in to overcome the terrible obstacle of having one of the very main characters die only a third of the way through filming. Poor Heath Ledger’s death could have scuppered the film completely, and apparently production was halted for some time, but due to the weird nature of the story line and the cleverness of the photography, the brilliant idea of substituting J, J and C for Heath was born. And in fact it works fantastically, as if it were meant to be.

The film feels like you’ve entered into the mind of Terry Gilliam and have been given the freedom of the city. Strange, weird dreamscapes. I once dreamed, as a child, of jellyfish-like hydra flagellating around Earth in space. I’ve dreamed of this several times since and put it down to one of my more bizarre subconscious offerings. But there it was, albeit briefly, in this film. Yes, jellyfish pulsating in space. How did Gilliam know? Or do lots of people dream about this?

The storyline was simple and quite archetypal buy phentermine 50 mg (father promises daughter’s hand to nasty stranger on a whim and then regrets it) and the characters the same. But it was satisfying none the less, and what I loved was the surrealism and sense that almost anything could happen. Dali-esque landscapes, nightmare moments and that strange dream thing we all know where for no apparent reason things suddenly change into something else and you just have to accept it – this was the essence of the film. Nothing made sense and yet to my subconscious it made perfect sense, for the film was the stuff of the id.

Stunning costumes, beautiful and sometimes breathtakingly exquisite sets, great photography – and an atmosphere of wild and bizarre decadence punctuated with really nasty violence and squalor, and then a swirl of magic and a flourish of showmanship – this was The Imaginarium’s appeal to me. Hell, I’m no film critic and haven’t read any of the reviews, although I believe the film has been slated by many. I’m not surprised as it’s an easy target, sticking its neck out and taking risks. So easy to take a shot. And perhaps so easy not to “get” this film, particularly if you lack a vivid and wild imagination.

All I would say is this: I have a low boredom threshold. In most films I either find myself nodding off like an old biddy, or mentally wandering off into making lists of what I have to do the next day, or fidgeting and looking at my watch. But last night whilst watching The Imaginarium of Doctor Parnassus, I actually forgot I was in the cinema. I was there, inside the film, and when it finished I had that strange disorientated feeling of coming back to the Real World with a bump. That to me is the mark of an excellent film.