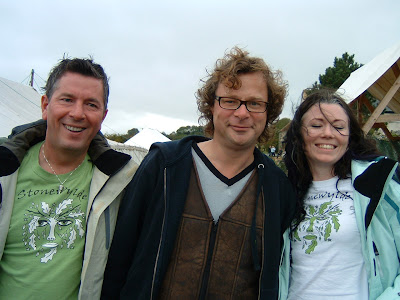 Anyone recognise the famous guy in this photo? No – not the Green Man of Stonewylde! I mean good old Dorset celebrity chef Hugh Fearnley-Whittingstall. Here he is at River Cottage with two passionately loyal Stonewylde fans, Brian and Bekki. Has Hugh read Stonewylde yet? I don’t think so, but he ought to. It would be right up his street, all that natural living, earth and vegetables and pig-slaughtering. Maizie’s jams and chutneys and those Lammas rabbit pies! Let’s hope Brian and Bekki persuaded him to try the first book. Maybe a celebrity such as Hugh could help us in our quest to get the nation Stonewylded.

I’ve often pondered on what it is that makes a book successful. In fact when I’m not actually writing the books, that’s what I spend my life doing. Marketing and promotion. Make or break. There are thousands of books published every year. And how many of these make it big? Of those that do, why do they succeed when other equally well-written or maybe even better-written books never get anywhere?

I was very naive when the first book in the Stonewylde Series was published. I’d had great feedback from many people, and this led me to believe that once the books were on the shelves, that would be it. I had no idea how the whole industry worked. I’m probably still naive, but I do know more now than I did then. It’s just as well that I had no inkling back in autumn of 2005 when Magus of Stonewylde was published, just how monumentally difficult it would be to market the book(s) and build up sales.

It’s a Catch 22 situation. Bookshops won’t stock books unless they come either from a large, successful and well-known publisher, or unless they come via a wholesaler/distributor. And the distributors won’t take unknown titles from an unknown author with an unknown publisher unless there are proven sales. Aaarrgghh! But through sheer persistence I’ve managed to get Stonewylde into many branches of Waterstones and Borders, and even more independent bookshops. Amazon will take any books as long as they can buy them in at massive discounts, so no challenge there. And once the books are held in stock by the distributors, they appear on all the online bookshops.

So the books are in the shops, but they have maybe one copy tucked away in a corner. Who is going to find that, let alone buy it? Especially when the whole shop floor is filled with books piled high in attractive displays, and the prices slashed in 3 for 2 offers. That’s where the marketing comes in. The big publishers have huge clout and it’s all arranged through the head offices. Their books are prominently displayed in large quantities. They have window displays and banner ads and dump bins promoting their titles. The little person just can’t get a look in. It’s impossible to even talk to the fiction buyer at Waterstones or WH Smiths or Borders. The wall is as impenetrable as that at Stonewylde. So where do you go next?

When you look at these terrible odds, it’s amazing that Stonewylde has got as far as it has. I believe its success so far is due to three buy phentermine sandoz factors (and not necessarily in this order of importance):

In marketing-speak (and I’ve read several books about this now on my steep learning curve) there’s this elusive thing called “the tipping point”. This is when a product has slowly built up its popularity and become reasonably well known and available, and then suddenly, perhaps even overnight, it tips into massive success. It’s this pivotal moment that all marketing aspires to, and one that more often than not is never reached.

But I feel that we’re approaching this now with Stonewylde. We can’t afford massive advertising and don’t have the clout to arrange huge promotions in Waterstones or any other retail outlet. What we need now is a catalyst to make the whole thing explode. In today’s world of mass-communication and media-driven reality, we need some kind of endorsement by somebody well known. Someone who will champion Stonewylde and bring it from underground wild growth into full blossom in the sunshine. That’s a rather weird analogy, but appropriate for a series of books that hinge on the power of nature.

I’m doing my level best to achieve this, and so are literally hundreds of fans out there, some of whom are active on the Stonewylde forum and share their thoughts and dreams with each other, but many of whom are quietly promoting the books to their friends and families. Soon … very soon I believe … our little smouldering fires are going to catch hold into a massive conflagration. I’m not after fame and fortune (although a little fortune would be very nice of course!) but I want Stonewylde to be the success my dear agent originally predicted. I want to share Stonewylde with everyone and touch their hearts and souls with earth-energy and moon magic and the power of the natural world.

On October 31st it will be five years exactly that I first had my flash of certainty, in a labyrinth of autumn leaves, that I was about to embark on a great journey. I knew at that moment that I would write and that what I wrote would be a great success. I think the time has come now. The tipping point is imminent! Strap yourselves in, folks, because it’s going to be an exciting ride.