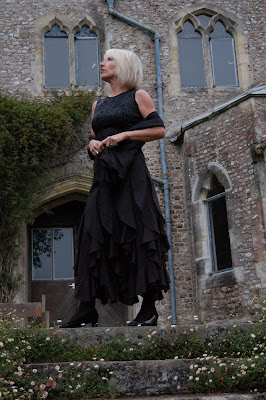 Kit Berry at Monkton Wyld, Dorset, copyright Graphic Photo-Arts
It’s Tuesday today. I’ve spent the last few days since Sunday trying to sort out the special limited edition T-shirt for the Stonewylde Harvest Moon Gathering. It’s all been a bit of a nightmare really, and it can only get worse as the weekend approaches.

Is it unusual for a bunch of people who’ve read a set of books to want to meet up? To form friendships and even for one pair, a relationship, and to then go off for a whole weekend, at some cost to themselves, to spend time with a group of strangers? Sounds like the plot for a dodgy film – the sort where you groan when they say they’ll split up to search the dingy, nasty corridors and you know there’s a mad axeman or equivalent waiting around the corner.

Well – this is what’s happening during the first weekend of September. It’s the Harvest Moon, and for those not in the know, this is the name of the full moon that rises in September, and is often, due to the atmospheric conditions, blood red in colour. And this moon is very significant too in the Stonewylde novels but we won’t go into that here. Although the admonishments of my erstwhile agent Clare Pearson still ring in my ears, “You can’t have a rape in the first chapter!”

Ages ago Mr B set up the Stonewylde community to help me cope with the Stonewylde fans. I never imagined this effect when I wrote the books, but somehow people are quite often profoundly affected by the books and are loathe to leave them behind when they’re finished. So they used to write to me, to thank me. Which was absolutely lovely (and still gives me a huge thrill) but then after I’d replied, they’d reply, so I felt I should reply ….. clearly once this involved a few people it was impossible to maintain. So Mr B had the idea of starting a community for fans and readers of the books. I was very sceptical indeed. Why on earth would anyone want to join? Surely if you were into social networking you’d already belong to lots of sites and certainly wouldn’t bother with one that related solely to Stonewylde. What would there be to say of any interest?

Mr B set up our original community site, a simple forum, in April of 2007. It was very like throwing a party – sitting there in the gloom buy phentermine capsules hoping that people would arrive. And they did! Lots and lots of them, slowly but surely, and very soon I realised that actually Stonewylde was something a bit more than just a series of books I’d written whilst working as a schoolteacher. I realised I’d created something a bit special, something that had taken on a life of its own.

We launched the new community, http://www.stonewylde.net/ on Dec 24th 2008. There was a lot of moaning at first from the old faithfuls who didn’t like the new format (especially a weird Welshman called Carp), but the new site has gone from strength to strength. However, prior to this, last summer a new rumbling had begun amongst the Stonewylde troops. They wanted a proper gathering. A get-together on a grand scale. There was talk of camping, of hiring a field somewhere, of maybe taking over a campsite or even organising a marquee. It quickly escalated, mild speculation rapidly flaring into a great conflagration of excitement, with people posting their ideas of where everyone could meet up.

Because I was the creator of Stonewylde I felt responsible. If this Gathering, organised by the fans for the fans, was a complete disaster then I’d be responsible really. So I thought that I should step in and take over. After a bit of searching about I decided to take the plunge and book Monkton Wyld. This is a Gothic mansion in Dorset, a holistic centre where I’d stayed few times on various courses over the years. What a huge decision! A bit like that film whose name escapes me now (please someone make a comment below and remind me!) with the baseball field, I had to have faith that “they would come”. I booked Monkton Wyld. The whole mansion for the whole weekend. It was a huge act of faith in my loyal followers that they wouldn’t let me down and leave me to foot a massive bill.

And now almost a year later, the date is nearly upon us. I’m up to my eyes designing a special limited edition T-shirt to give to everyone in their goody bag on arrival. In the next few days I shall blog a bit more about this special weekend. Meanwhile I have to get back to work now and start making a list of people who have offered to play instruments and perform at the Stonewylde party on the Saturday night! Oh it’s a hard life.