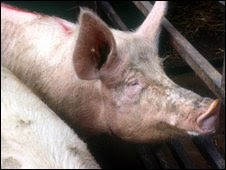 I decided to blog about this to put anyone’s mind at rest who may be worrying about catching the disease, and how bad it really is. Swine flu arrived in our house last week and hopefully is now about to leave! So far Mr B and I seem to have avoided catching it, which is amazing given the fact that we’re all in the same house together and I’ve been caring for my son since the first symptoms struck. Of course I may be speaking too soon here!

I remember when this potential pandemic began back in April of this year, it was really very frightening. There’s a balance to be struck between reporting news and keeping everyone well informed, and actually fuelling fears and creating wide-spread panic. At one point I really felt it to be the latter, with the media reporting almost by the minute where the flu had spread, how many cases, and then bombarding us with terrifying statistics about death from flu.

I remember in school learning that more people died globally from the pandemic of Spanish flu that began in 1918, than died in the First World War. I’ve just looked up the statistics on a BBC News website, where the pig picture above also came from, and it states that:

“1918: The Spanish flu pandemic remains the most devastating outbreak of modern times. Caused by a form of the H1N1 strain of flu, it is estimated that up to 40% of the world’s population were infected, and more than 50 million people died, with young adults particularly badly affected.”

This dreadful statistic does explain why the World Health Organisation were so worried earlier this year. Swine flu is also of the H1N1 strain, and again young people were affected rather than the elderly. The number of deaths each year from flu are frighteningly high, but this seems to be normally due to the elderly developing respiratory problems and complications, rather than young and supposedly healthier people dying. If the 1918 pandemic killed more than 50 million people, imagine what could happen today with the vastly increased effects of globalisation.

I really felt for that Scottish couple who first contracted this swine flu. How scary must it be to feel ill and know the country is watching, wondering after all the horror can u buy phentermine stories whether death is imminent. So when my youngest son, the 21 year old who graduated a couple of weeks ago, started to feel ill, our immediate reaction was that maybe it was swine flu.

There were signs on our doctor’s surgery door and our local pharmacy saying “DO NOT ENTER IF YOU THINK YOU HAVE SWINE FLU!”. The news was still reporting huge numbers of new cases, and Will said that lots of people had been off work. He works in HMV at the moment, which is staffed largely by under-25s, and with the school holidays upon us, probably mostly visited by teenagers and youngsters. So if this flu is mostly affecting the young, statistically he was bound to contract it.

His symptoms were a high temperature, feeling very ill, aching all over, severe shooting pains in the back of the head, mild hallucinations, a sore throat and sneezing. Pretty standard flu stuff really. It said on the NHS website that unless you were in one of the vulnerable groups of people, you probably wouldn’t need or be able to get the anti-viral drugs. So I simply dosed him regularly with paracetomol and made sure he drank plenty of fluids. Of course it’s possible that he doesn’t have swine flu at all, in the absence of confirmation from a blood test, but the NHS website says that if someone has flu now it is more than likely to be swine flu, and all Will’s symptoms fit exactly.

But for anyone who hasn’t yet had it and is worried, I wanted to reassure you that as far as flu goes, it actually is quite mild. I had two bouts of flu back in the early 1990s and I was really pretty ill, and for much longer than this. So my experience now with my son confirms the news reports: that unless there are underlying medical problems, it’s not that bad!

Hopefully my boy will be back at work by the end of the week (he wanted to go today but really wasn’t quite ready) and Mr B and I will avoid it altogether. And with any luck Mr B’s appallling swine flu jokes will also cease. The latest source of mirth being Will’s “pigsty of a bedroom”. Groan!!