Stonewylde – article for deletion in Wikipedia 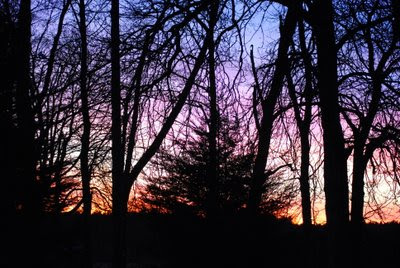 This photo isn’t particularly relevant to my blog today other than it’s the view of sunset from my writing room window. I call this special room ‘A Room of One’s Own’ and Mr B gets confused and calls it ‘A Room with a View’. So here is the view.

I went out today (briefly) – the first time I’ve driven my car in almost two weeks. I’m still a bit wobbly but finally, this virus has released me from its grip. I’ve started writing again, having tried and failed miserably whilst I was feeling ill, and am so happy to be getting on with the fifth book properly. I’ve almost finished the second chapter, which I know seems like appalling progress, but in fact it’s the hardest bit, the beginning. There’ll be no stopping me now!

In the meantime, in view of some of the lovely coments on my last rather disconsolate post, I thought I should say a little bit about what’s been happening on Wikipedia recently. We were first alerted to the shenanigans by our own dear Cornmother. For any reader of this blog who doesn’t belong to our online community, Cornmother is one of our original and most loyal and staunch supporters, and is also an incredibly efficient researcher and gatherer of information. She warned us recently that Stonewylde was about to be deleted on Wikipedia.

It seems that they’d already deleted the entries for each of the Stonewylde books, and also the entry about me as an author. Now under the hammer (or is that axe?) was the article about Stonewylde. This article describes(d) the whole place – not the books, but the place and the community itself. It spoke of things like the Meadery and the Stone Circle, the Great Barn and the celebration of the festivals. The article was all about the world of Stonewylde. Apparently it’s up for deletion not because it describes a fictional place (examples cited in the debate were Narnia, Gormenghast and Hogwarts) but because it isn’t notable. This is wiki-speak for it doesn’t have lots of references – or rather, it hasn’t been referenced by many other articles. In other words it’s not actually important enough to warrant an entry.

There were some very disparaging and dismissive remarks about the fact that the books were self-published (sadly this had not been updated) and as all information about me led back to my website, I was not considered notable in my own right. There was quite a lot of discussion from various sources about this. The fact that I’d been featured by the Dorset Evening Echo four times (and one of these was a huge double paged spread) wasn’t considered enough to make me or Stonewylde notable. The fact that the first book was reviewed in the Financial Times, and there have been articles about me in many magazines and also The Times (T2) and the Telegraph, not to mention other local papers such as the Western Morning News – none of this counted for anything. Nor did the fact that the series had been picked up by Orion Books and republished, generating articles in The Bookseller and Writers’ News.

The whole thing has made me wonder – at what point does something become big enough or important enough to warrant an entry in Wikipedia? I think the latest news is that they’re reinstating an article about me as an author. I haven’t actually looked today to see if Stonewylde has been deleted yet. I tried yesterday but of course it was blackout day. It isn’t the end of the world and I’m sure if Stonewylde grows further, it’ll warrant its own entry in Wikipedia. Not that the inhabitants of Stonewylde would approve of course – it is a secret community after all!