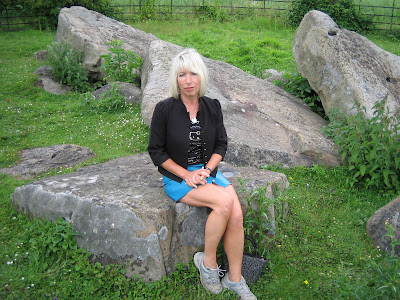 I was interested to read today about a Dorset couple who moved from Weymouth to Dorchester and took a “prehistoric” stone circle with them. My first reaction was “WHAT????“

On reading several versions of the story online (the Telegraph, Mail on Sunday, Sun and also some US and Canadian sites) it transpires this was not the case at all. John and Suky Burton, well-known Dorset pagans – he is a Druid and she a witch – were moving from a large mansion outside Weymouth to a smaller house in Dorchester. In the grounds of their old house was a stone circle, which had apparently been constructed in the early 1900s by Thomas Burberry (of Burberry fame) using thirteen Portland stones. The pagan couple had used the circle for many a ritual, and were intending to leave it for the next owners to enjoy.

But when the property developer buying the house said he intended to break up the circle and dump the stones, John and Suky had to act. They hired a great crane and twelve “burly” men, and moved the thirteen stones to their new home in Dorchester. It so happens that their new place is on a ley line which runs between Maiden Castle and Maumbury Rings, and they positioned and aligned the stones very carefully with this. Apparently they are both delighted with the new energy they can feel around the stones, and there were some lovely photos of them both in robes next to their new circle.

You can imagine the scepticism of some people’s comments at these online reports. To be fair, most of the news reports were fairly neutral in their commentary and simply reported the event as it was with no obvious bias. The Sun of course could not resist a little sensationalism, and their headline was “Our crazy pagan couple believe stones give them powers”. However, the rest of the article was fairly restrained and even managed to avoid the dreaded Sun-puns. The papers reported that the couple then invited twenty other witches to a night-time ritual to dedicate the stones (wish I’d been there!) and this is what inspired me to blog about this.

I thought – isn’t it great that this can now be done openly, and reported in the national (and international) press? It wasn’t so long ago that people had to be so secretive about their pagan beliefs, and could never have openly held a ritual such as this. There may well be local backlash towards them of course, but hopefully the majority of people will be tolerant, and leave the couple in peace to follow their own beliefs. There’s such a growing interest in paganism; one of the papers quoted that in the 2001 census there were 30,000 pagans. I would imagine this figure will be infinitely cheap phentermine offers higher in the next census as more people come out of the broom closet.

Having been so happy to see how open pagans can now be about their beliefs, I was then saddened at one of the comments posted about the report. A man accused the couple of being “super-market trolley” pagans, and dismissed Suky’s claims of being a hereditary witch from her mother and grandmother before her. The man making the comment was clearly, from the other things he said, a pagan himself. It made me sad to see yet more evidence of this awful back-biting and bitching that goes on amongst some people who purport to have the same broad beliefs.

If paganism wants to be acknowledged as a religion or spirituality, then followers need to present a united front to the world. I do understand that there are many different branches and traditions amongst people loosely classified as pagans, and nobody likes to have their beliefs lumped in with others’. But for us to be taken and treated seriously, we do need to show the rest of the world that we are together in promoting a green spirituality, whatever path we’ve chosen to follow.

I was concerned, when writing Stonewylde, that I may upset some groups with the type of paganism I’d chosen to portray in my story. I thought that maybe I’d get angry letters or e-mails from people saying “This isn’t right – we do don’t it that way and you’ve got it all wrong”. Thankfully, so far this hasn’t happened, and I do know that Stonewylde has been read by a great many pagans. It seems that most people accept that what I’ve created is just my version and I don’t speak for any other groups. It would be lovely if this same tolerance and understanding could be spread across the board.

Incidentally, the news reports I read about John and Suky’s stones did make me think – when does a Stone Circle become so sacred and special that it must not be moved? How ancient does it have to be before it gains special status and must be protected? All stones of course are prehistoric (think about it!) but the ones in this news story had only been in place for 100 years or so. Is it the place that makes them special, or are any stones, aligned with intent, sacred in themselves? I’d be interested to know what others think about this.

The photo at the start of this post (I obviously couldn’t use the ones in the papers for fear of breaching copyright) was taken back in the summer at a small stone circle called Kit’s Coty, near Maidstone in Kent. And unlike the repositioned Portland stones, these had been here for a very long time!