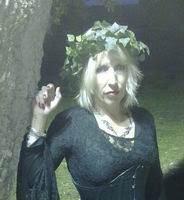 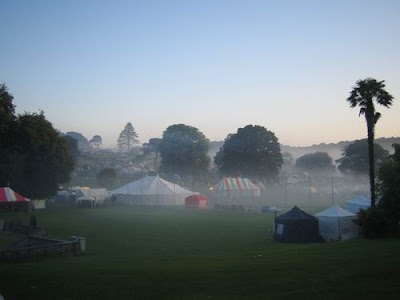 Above are the before and after photos. The gothy one is me on Friday night before bedtime (mattress-time?), near the campsite. Please note the necklace which I shall tell you more about another time. The beautiful one of the empty grounds swathed in morning mist is after the sleepless night.

It wasn’t really the toddlers’ fault at all. In fact most of them were very well-behaved and slept beautifully all night. But there was one who whinged and moaned throughout the night and of course with only a couple of sheets of thin nylon between us it seemed she was crying right in our ears. She didn’t howl or sob – she just made this awful wailing sound that went on and on and on. And she kept it up in the daytime too. But really it wasn’t her fault totally – there was a group of yobs who decided to carry on with the party after the music stopped at 3am. They shouted and yelled at the tops of their voices at regular intervals until 5am, waking Moaning Laura (I know her name well because her parents spent most of the night saying ineffectually, “Laura, have you stopped crying?” which was absolutely stupid because clearly she hadn’t).

So we’d get shouts and raucous laughter, followed by lots of wailing, followed by parental hissing. All would go quiet after ten minutes or so of this, I’d just about drop off into sleep again, and then it would start again! It stopped not long after 5am because I pulled on my jeans, jumper and trainers and marched across the misty site to the group of tents where the horrible louts were still drinking beer and started taking photos of them. They didn’t like this. Then I marched back towards my tent but luckily at that very moment two buggy loads of security men (where had they been all night during the anti-social behaviour?) drove past and I flagged them down and sent them over to the drunken idiots. I don’t know what they said but it worked. All went quiet at last!

But by now I was wide awake and still in high dudgeon. The sun was not yet up and everything was bathed in pearly mist; it was so peaceful and beautiful. So I went for a wonderful walk all along the river and into the maze – the one my lovely Mr B had helped to build as a nineteen buy real phentermine 37.5 mg online year-old – and pondered the meaning of life for a while. There were very few people about and I took some fantastic photos. The rain-clouds had vanished and the wind had disappeared, and I was very relieved to find the Stonewylde Gazebo still standing on the slope.

As people started to wake up I went back and made us both tea and bacon rolls. We had a busy day ahead, setting up all the Stonewylde stuff, and I had a talk to give! It took ages to get our things unpacked and displayed properly. Cornmother had made me lots of beautiful corn dollies, and I also had my lovely Green Man, some hares, owls and of course books to set up. Being on such a steep slope was a challenge as everything just slid off the tables. We became quite ingenious in our methods of stopping slippage. We also decorated the gazebo with ivy, sunflowers, poppy and wheat, not to mention a huge blown-up poster we’d had made of the Stonewylde Wheel of the Year. Finally it was all to our satisfaction and I nipped back to the campsite to change into my Corn Mother costume. And would you believe it, Moaning Laura was still at it?

There’s something about wearing a full length ballgown and a head-dress that immediately makes one feel both regal and special. Walking back from our tent to the main lawns where Mr B waited in the gazebo, I felt very like a real Lammas Queen. People smile at you when you’re dressed up in a costume. It was lovely!

But the time for my talk was approaching, and the lack of sleep and general excitement was beginning to take its toll. My eyes felt scratchy and my head was full of dandelion fluff. There was a brief ten minutes of panic as we thought the famous Round Room had been double booked, but that was sorted out. I don’t normally get nervous before giving a talk but this was somewhat special, and I must admit I walked into the beautiful room feeling more than a little apprehensive. But then Caz, the lovely security lady with blonde pigtails and a broad Scottish acccent showed me the secret of the Round Room, and that was it! There was no stopping me then.