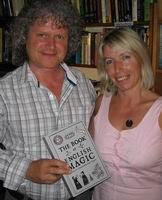 Yesterday I attended a conference in Bloomsbury called “Publishing Laid Bare”. It was also the book launch in the evening of Philip Carr-Gomm’s latest book (written with Richard Heygate) “The Book of English Magic”. So I hopped on the Paddington train with Mr B at the crack of dawn (or so it seemed to someone who after a lifetime of getting up early to go to work now makes a point of not emerging before 8am if possible) and arrived in Russell Square bang on time.

The conference was good. Organised by Legend Press, there was an impressive array of panelists offering “straight-talking advice and useful information” about a range of publishing topics, not least where the industry is heading. A couple of weeks ago I attended another conference/seminar thingy organised by Nielsen, the people who run ISBN codes and give out figures for how many books are sold each week, amongst other cutting edge stuff. Whilst I was there I felt a bit of a medium sized fish amongst some minnows, largely because one lovely person who works there said how impressed she was with Stonewylde’s sales figures which she’d looked up earlier. And there were people present who didn’t know about anything at all, being new to publishing, and didn’t understand about things like the Gardners/Waterstone’s double act, how ISBNs work, what enhanced data is, etc.

However at yesterday’s conference I felt again like a minnow myself. There’s always this slightly uncomfortable moment when people say “Oh, Moongazy Publishing – which authors do you work with?” and I have to admit that I only work with myself, being both Moongazy Publishing Ltd and also Kit Berry of Stonewylde. But that said, the conference yesterday was very interesting indeed and I got to meet some influential people, which of course is one of the main reasons for attending such events.

I’m off to Buxton in a minute (well, about 90 of them just as soon as I’ve finished ironing my Stonewylde T-shirt and packing our case) for a weekend of talks and book signings. I’ve never been to the Peak District before and Mr B and I are staying in a rather luxurious farmhouse B&B with exotic decor, judging by the website. So I can’t write more now as time is pressing and Mr B has warned me not to be stuck on the M1 going buy phentermine usa north in the rush hour. He knows how notoriously late I always am at leaving when there isn’t a specific deadline to meet. It’s always a matter of “I’ll just do this” and “I’ll just finish that” and then several hours later I leave the house in a foul mood because I’m so late. So I must stop writing this now, but I just wanted to say this:

One of the people I met yesterday was Mark Thwaite, a big mover and shaker in the industry. He said that being a blogger is a commitment. He said it’s like marriage – has to be worked on regularly. He said you can’t blog a bit and then leave it for weeks or months (yes, I know, I know!). Either you blog regularly, ideally daily but if not then at very regular intervals during the week, or don’t bother. It’s not fair on your followers, Mark said, not to make that commitment. And he also said it’s a good discipline, like writing a public journal. One of the problems I’ve had with keeping up my blog is that I’m not sure if I have anything interesting to say. I feel there should be some momentous news to impart before I log onto Moongazy Girl and broadcast my thoughts to the world. But according to Mark, blogs have got to be interesting but not necessarily momentous. I suppose there are enough keen Stonewylders out there to make this worth working at.

So watch this space, folks! I’m off for the weekend soon (80 minutes and counting now!) and will be really busy at the Health and Healing festival, and also hopefully finding some time to walk in the Peak District for a couple of hours at least and we MUST visit Arbor Low which I’ve been told is a wonderful stone circle. But as from next week, Moongazy Girl will metamorphasise into a blogger extraordinaire! And I’ll need lots of feedback please to let me know if I’m on the right track or boring you all silly!

Have a great weekend, everyone. If you’re coming to one of my “Reconnect with Nature” talks in Buxton I shall see you soon. And next week I’ll tell you all about Mark Thwaite, Scott Pack, Philip Carr-Gomm and much more!