Signing with my literary agent at Centre Point 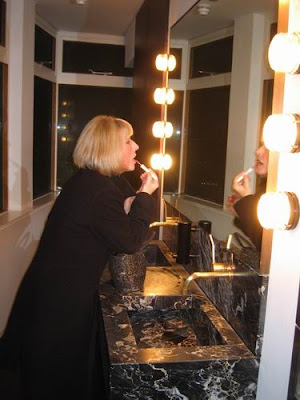 Lipstick in the black marble bathroom – reminiscent of Magus’ room! 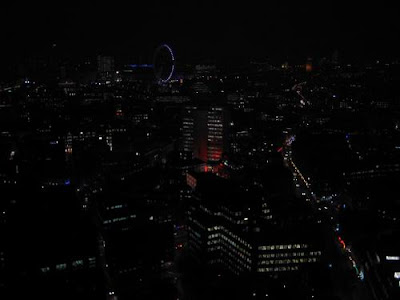 View from Centre Point across London – including the London Eye 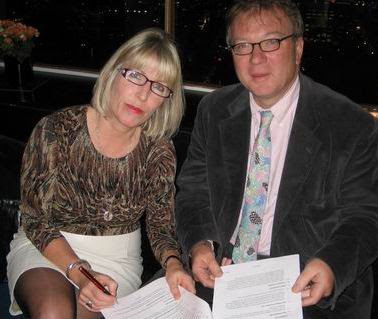 Kit signing up with Piers Russell-Cobb 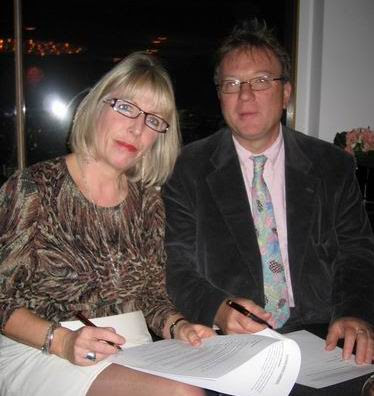 Piers anticipates success with Stonewylde!
Last night I spent an exciting evening which may just change my life! After three months of discussion and negotiation, I zoomed up the dizzying height of Centre Point in Tottenham Court Road, London in a swishy lift to sign an author-agent agreement with Piers Russell-Cobb of The MediaFund Ltd.

There was some other big event going on at the Paramount Club, which occupies the top three floors of this sky-scraper landmark building, and downstairs the security men were turning away journalists and paps alike. “Surely,” I thought, “they haven’t come to photograph me signing up with my new literary agent?” No, they hadn’t. It was an interview and photoshoot with someone called Kate (Moss? Winslett? Price? – I didn’t actually get to see her as this was on a different floor) and we were left alone to sign the contract.

It could have all turned nasty, as in the glamorous darkness of the Paramount Club’s facilities(and not wearing my glasses at this point) I was just applying more lipstick when Mr B barged into the loos.

“You can’t come in here!” I spluttered indignantly. Is there no sanctuary from my husband’s attentions? But it turned out I was in the Gents’ – whoops!!

Anyway, after my faux-pas we sat in the very glitzy lounge drinking a crisp Sauvignon Blanc with the most amazing backdrop behind us – London spread out like jewels – and Piers outlined again his exciting vision for Stonewylde. He really is a darling, and I’d sign up with him for his perfect vowels alone. I remember his first phone-call, when he’d started reading Magus of Stonewylde and realised that he’d found his next big project. He was so excited! What I really like about buy phentermine in uk Piers is that he completely “gets” Stonewylde. He’s an experienced business man, having worked in the publishing and film industries for many years after Oxford, and most recently attached to the Marsh Agency as well as running his own company. In Piers’ mind there is no doubt about Stonewylde’s success. He understands it’s different, hard to categorise, outside the box. But that’s the sort of man he is too, and with his extensive range of contacts in the world of books and films, he’s confident of securing a good deal for me which will enable Stonewylde to finally hit the big time.

I’m an upbeat sort of person but I’m also a realist, and would never make the mistake of counting chickens too early. I’ve always had faith in Stonewylde and its appeal – several thousand readers can’t be wrong! But likewise I will believe it all when I see it, and in the meantime I’d like to thank again all those who’ve been behind me from my early days as a complete unknown, a Dorset school-teacher who had the dream of becoming a writer. I’ve had the most amazing, uplifting support and loyalty from my readers, many of whom have spent their time and money helping to spread the word, following me about on my travels, writing me e-mails of encouragement, keeping my networking site active and welcoming … the list just goes on and on. I can’t imagine there are many authors who enjoy such incredible support and I’ll never forget it.

Let’s hope that last night’s signing with Piers Russell-Cobb brings Stonewylde into the mainstream and perhaps even onto the big screen, and most of all that I’ll now be able to concentrate on writing. That’s what I’m longing for most – there’s a lot more to come from the pen (or laptop) of Kit Berry!