It’s Sunday, and I’m feeling tired and happy.  Yesterday was the official launch of my final Stonewylde book (despite Amazon sending out copies all during the week!) and I’d chosen to do this at Waterstones in Dorchester.  I decided this because the shop (as Ottakers) had been one of the very first places to stock the original self-published editions of Magus of Stonewylde back in October 2005.  I’ll never forget the thrill of seeing my first book on a proper shelf in a proper bookshop!  So seven years on, it seemed appropriate to launch the fifth and final book in the series in the same shop, although the staff have changed several times.

On Friday I spent the morning baking cakes.  These were Ceremony Cakes, which anyone who’s read the books will know all about. 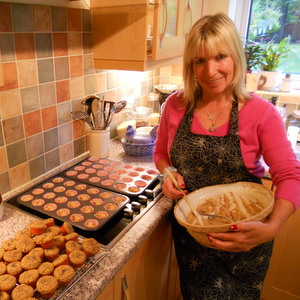 There were many jokes in Waterstones about the likely effects of these cakes – but the exotic taste was, I promise, nothing more than a careful blend of cinnamon, rosemary and lavender, with a sprinkling of poppy seeds for good measure.

The staff at Waterstones (Max, Darwin and Emma) had done me proud again, with a lovely big table and plenty of copies of Shaman, all beautifully arranged, as well as the other four books.  It was brilliant to see so many people who’d come along to buy copies of the books and get them signed. 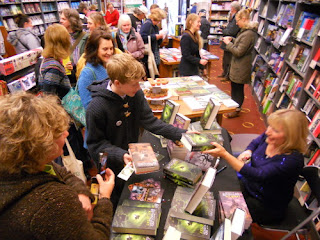 It’s so exciting to have a queue of people waiting, and one of the first customers of the day was a lad I’d met on World Book Day when I visited St Osmund’s School to talk to the pupils about writing.  He’s now an avid fan, and he stayed in the shop for most of my time there talking to other shoppers (he’s a great salesman!).

Another very keen Stonewylde fan came to buy her Christmas presents.  She’s bought all the Stonewylde books for members of her family right from the start, and she’s a little concerned about what she’ll buy them next year!  You can see her here with eight copies of Shaman! 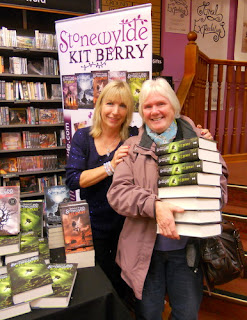 A very proud moment for me was when a handsome young man who’d been standing in the queue for a while finally reached me, and stood there grinning.
‘I don’t expect you remember me,’ he said a little shyly, and I was amazed to find it was a boy I’d taught many years ago when he was in Year 6 at primary school – he’d just graduated from university this summer!  I certainly did remember him, though I didn’t recognise him!  In fact, several of my ex-pupils turned up, and it was great to see them all looking so grown-up.  And excellent to know that all my nagging about reading paid off too! 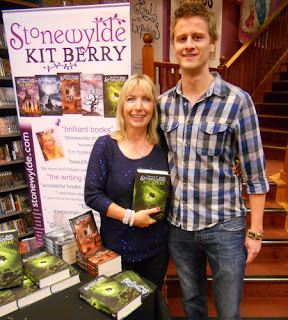 One thing that did surprise me was how many people who came along who were my friends on Facebook.  Many of them I’d never met before (they “friended” me after reading my books) and it was great to actually meet them in the flesh. 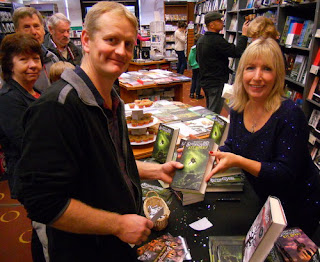 I really appreciated some of my self-named Promo-pixies turning up to support me.  There’s nothing better than the sight of a lovely familiar face at a book signing, and they were brilliant. Unfortunately Mr B didn’t take any photos of them in action, which was a little remiss.

One of the very last people to come to the signing, just as we were finally packing up and getting ready to leave, was a young lady who’s at present studying Creative Writing at Winchester.  I was so glad she made it in time, and it was great to know that she’s found Stonewylde such an inspiration. 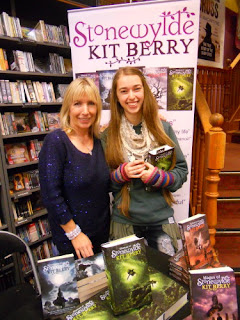 Many thanks to everyone who came along to buy the final Stonewylde book, and I really hope you enjoy the story.  On our social network site, there are discussions going on amongst people who’ve now finished it.  Many are referring to it as “a roller-coaster read” and I’m looking forward to seeing how people review the book online.

My next trip out is on Tuesday when I’m a guest of Greg Mosse, who runs the Creative Writing MA at West Dean College.  I’ll be speaking to his students about Stonewylde, and I’m really looking forward to it.  The next signing event is on Saturday at Glastonbury, where I’m also attending the Faerie Ball.  I have a small pair of wings ready, and lots of glitter.