I’m Drax, and on Sunday I left my litter and was driven all the way to Reading to live with my new family. I’ve settled in quite well at my new home, although it’s a bit mad here.  The two Burmese cats, Magus and Malik, are very unfriendly and have resisted all my attempts at friendship. The three chickens run when they see me and hide amongst the trees making silly noises.  Good job Kit and Mr B love me so much!

A bizarre thing has happened though – this big cardboard box arrived and it made Kit squeal!  I had a good sniff of it but really, it seemed quite innocent.  I have no idea why she was in such a state.  I thought I’d better stand guard whilst she dashed off to the kitchen to get a knife.  A knife??? 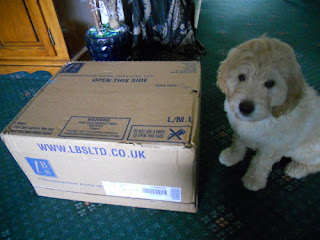 While she was gone, still making strange, excited noises, I thought perhaps I could lend a helping paw.  Or at least, a very sharp set of puppy teeth, which are much safer than anything she could find in the kitchen. 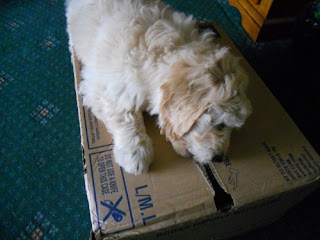 So I pulled and tugged at this delicious little cardboard tag that silly old Kit had missed …. 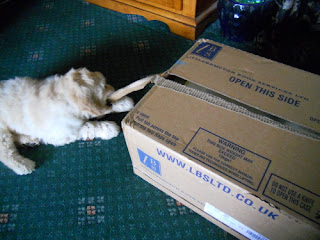 And I really pulled hard, and gave a little growl for good measure, until at last …. 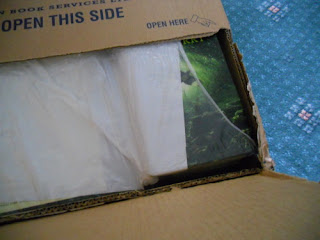 A bit of green was visible, and Kit made such a very loud shriek that I had a small accident on the carpet!  She took over at this point with the box, pushing me away and muttering about my sharp teeth and her precious Shamans. 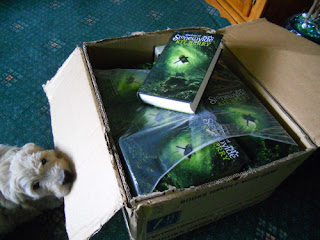 Honestly – I was quite pleased then that she hadn’t called me Shaman, which I know she nearly did.  I mean – I’m not green, nor do I have anything to do with hares, magpies or snakes, all of which I could see on the front covers of the books.  By this time, she was doing a crazy dance all around the room and phoning Mr B and really, getting quite over the top.  And then she grabbed one of the books and raced upstairs (where I’m not allowed – and all because those snooty cats think it’s their domain) and I heard her burst into tears! 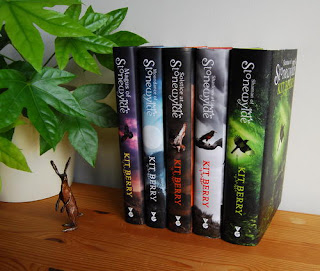 When she came down again, I gave her a very thorough wriggly, bitey lick to cheer her up, but I don’t think she was sad at all.  She said it was one of the best, happiest days of her life, seeing all her five books together on the shelf.  And then she said something even stranger …