Raiders of the Lost Dolmen 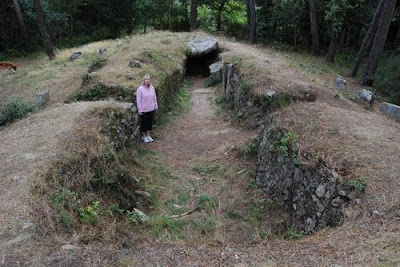 The sunken Dolmen at Carnac – in cruciform shape 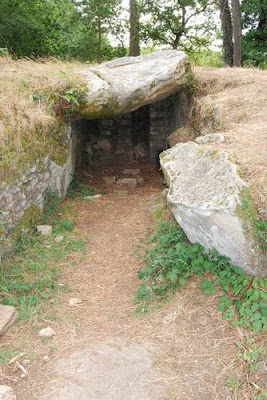 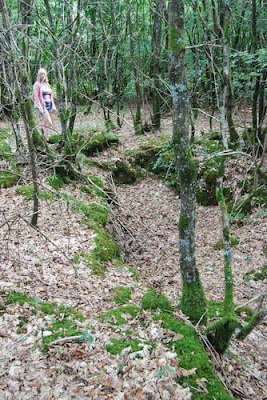 Our discovery – full up with leaves 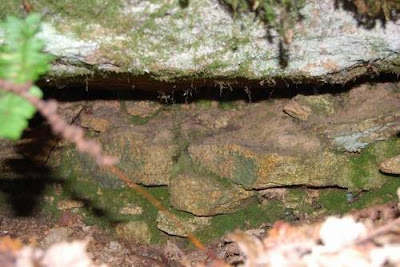 Close up in our discovered dolmen – note the dry stonework!
This is my last blog (for now) about our wonderful holiday in Brittany. I’m so lucky that Mr B shares my love of megaliths! It was his idea to spend most of our holiday visiting some of the famous sites, and of course I was overjoyed. This was my idea of heaven and it was great to have someone to share it with.

I’ve already written about our visit to Carnac, but I didn’t tell you about the sunken dolmen we saw there. It was really off the beaten track at the quiet end, down a little road that said “Private”. But then was signposted “Dolmen” so we cycled half a mile or so and eventually found it. This was not like any dolmen I’ve seen before – usually they’re a large capstone set on two or more upright stones – and they’re above ground.

This one was long – you can see from the first photo above just how big it is. It’s cruciform in shape, which means it has two side bits going off the main passage. I haven’t read anything yet about these types of dolmen but it seemed to me they might have been underground chambers rather than open like they are now. They could have been much deeper originally but filled up with soil over the years maybe. Perhaps they had more capstones over the top to form a roof. These would have been much easier to construct I’d have thought – dig out a trench and chamber, line it with dry stone walling and some upright stones, then top the whole thing with a massive stone roof that can be slid over rather than raised up. Surely raising those massive capstones to any height must have been the hardest thing of all. And of course there’s a little end chamber too, a very special hidden place. This is just my guess-work you understand! If anyone knows more, and I’m sure many of you do, please enlighten me.

These sunken dolmens are so interesting, and a different concept to the ones above ground. We’d already seen the passage-tomb covered by a cairn on the Island of Gavrinis. We’d also seen the huge upright dolmen (the most common sort I believe) at La Loge aux Loups. But this sunken one was a new thing to me and I found it fascinating. I imagined it all covered over, with the entrance and exit at the sides. I could picture people dressed in their ceremonial best, the interior decorated beautifully and lit with guttering flames, our ancestors taking part in some sort of sacred ritual.

A couple of days later we visited La Loge aux Loups buy phentermine 37.5 online uk again, but this time a couple were sitting there having a picnic. At our private dolmen! So we decided to explore the woods and return later, and set off on a lovely wandering walk through the woodland. I really enjoy these sort of walks with Mr B because we never get properly lost, as I sometimes do when I’m on my own. After a while we noticed some massive mossy mounds lying amongst the trees and went to investigate. Yes, sure enough they were megaliths! Fallen ones, which were covered with thick emerald green moss. The further we went, the more stones we noticed. Bearing in mind we were close to the massive dolmen at La Loge aux Loups, we released that probably the whole area was a sacred site with all sorts of megaliths, perhaps even like a mini Carnac originally.

The woodland was overgrown with very little sign of any human activity at all. Then we noticed some more stones, went to look more closely, and almost fell into a pit of dead leaves. It was a long thin pit – and something clicked! Could it be another sunken dolmen???? We started to examine the sides of the pit, and were both struck by a great bolt of excitement and delight – the sides weren’t made of earth but of stone! Much of it was covered with moss, but if you scraped this off a bit you hit stone – and some in the same dry-stone style as the dolmen at Carnac (and the long barrow at West Kennet for that matter).

We didn’t excavate. It was getting late and we needed to get back. It was also our last day there, so we resolved to return another year and find our own secret dolmen again. Mr B took a close up photo of what we could see of the end-chamber bit – you can see this in the fourth photo above. We may be wrong of course about it being a dolmen, but this pit was most definitely a man-made thing. It had filled up with leaves and earth, and there were even trees growing inside, but it was lined with a mixture of huge stones and the dry-stone walling and was big. All around it there were massive megaliths lying on the ground, camouflaged with thick moss. We were pretty sure that we’d stumbled on an ancient site, and I really can’t tell you how exciting that felt!

Tomorrow evening we set off for Dorset, for the Harvest Moon Gathering. I shall try to do a quick blog before we go, time permitting. I’ve been going crazy today but I think it’s nearly all sorted. Strange to think of all those Stonewylders all over the country preparing for it too – and I bet they’re as excited as I am.