Race for Life – in memory of Debbie 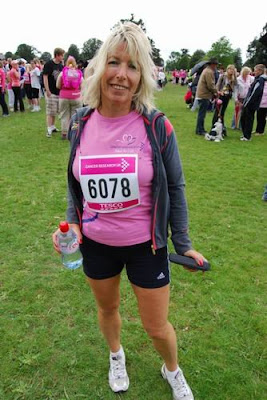 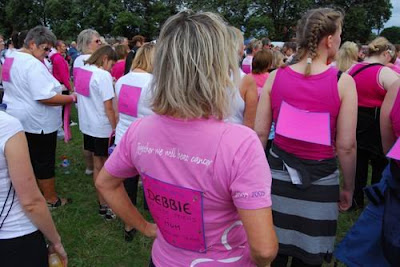 I’ve done it! My first Race for Life – 5kms! It was really great and if you’ve been thinking about doing it yourself but weren’t sure, then make it a date next year because it was an amazing experience.

I’ve been training since January. I’m not a natural runner at all and it didn’t come easy to me. But I followed the training schedule where you start by running for 1 minute, walking 2 minutes and repeat eight times – and you do this four times a week. Gradually, week by week, you increase the running time until by the end of it (about 12 weeks I think) you can actually run for 30 minutes, which is about 3 miles. When I say run, maybe jog is closer but I don’t know the exact difference, when a jog becomes a run.

There were apparently 2750 women and girls registered to take part in this afternoon’s Race for Life at Reading (and a similar amount this morning). The venue was packed with people, both participants and well-wishers. There really were females of all shapes and sizes and ages, dressed predominantly in the Race for Life pink although this is not compulsory. I’d been a bit nervous as I’d entered as a runner and was worried that I wouldn’t be able to keep up (well I am in my fifties!) or might need to stop for a breather, but this didn’t matter at all. The faster people left first and the walkers left last, and everyone else left in the middle. It was easy to dodge people who were a bit slower, and easy to slow down yourself if you needed to walk for a few metres to catch your breath.

I had a sad spell this morning when I logged onto my Race for Life sponsorship page to check how much money I’d raised. I read my tribute to Debbie, my best friend who died of secondary breast cancer in March of this year. I wrote this tribute just after she died and before her funeral, when I was feeling totally devastated and raw. Now in July, four months on, I’m over that stage of grief thank goodness, and at the point where I just miss her terribly and forget sometimes that she’s gone for ever buy phentermine wholesale from this life. I think “Oh I must tell Debbie that” and then remember all over again that she’s dead. Mourning is a healing process and the grief isn’t so debilitating any more, as the memories of her suffering and last weeks fade and the good memories surface again. However, reading my tribute to Debbie this morning brought it all back and I had a good old cry.

But running the Race for Life is such a positive thing and Debbie was so pleased I was going to do it. She was such a fighter and refused to accept the possibility of death almost up until the very end. She had faith in medical science and the chance of a break-through in cancer care. She also believed in the power of positive thinking and practised this all the time. I’m sure this is why she survived longer than predicted. I hope that the money raised by every woman taking part in the Races this year will help to prevent others dying and suffering so much. I know many women who have successfully fought cancer and are still with us today, which is the wonderful thing we must hold on to. This is in no small measure thanks to the work of charities such as Cancer Research UK, who organise the Race for Life.

Thank you so very much to all those who sponsored me. I can’t believe I raised over double my target, and it’s all thanks to you. I was thinking of you all today whilst running round Prospect Park with the wind blowing and the odd spattering of lovely cool rain falling on my face. And of course I was thinking of dear Debbie, and my mum who also died of breast cancer a few years ago, strangely on Debbie’s birthday. They’d always got on so well and often ganged up against me, usually about my untidiness. I carried memories of them both with me today as I ran, as I shall carry them for ever. And I certainly intend to take part in the Race for Life again next year. It was one of the most positive things I’ve done and it really helped in my grieving for Debbie. And my sponsorship came to £1,105!!! Thank you xxx