Power of networking – Australia and Damh the Bard 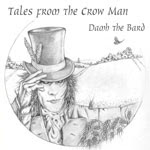 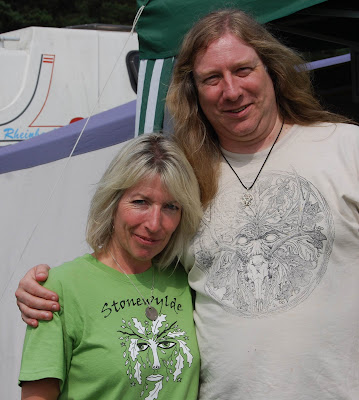 Kit and Damh the Bard in 2008 at Wessex Gathering near Swanage
I first met Damh the Bard at the Wessex Gathering back in May of 2008. It was a very hot and sunny day (hence the awful squinting in the photo above) and I arrived in a bit of a fluster to do a talk in the marquee and sign books with Jerry and Diane Bird at their bookstall. I knew that Damh the Bard was going to be there – and that he wanted to meet me as he loved Stonewylde. It was an exciting moment when this great bear of a man descended on me and enveloped me in a massive hug! I was very honoured to meet him as Damh is a talented pagan musician, a respected Druid and a man with a huge following.

We kept in touch loosely via e-mail, and then earlier this year he invited me to do an interview with him for Druidcast – the Druid Podcast. I must confess I’d never heard of it and had no idea what it was all about – but having met and liked Damh, was happy to go ahead. We did the interview, which lasted about 45 minutes and was very enjoyable. Damh was professional and fun, and what was so lovely was his enthusiasm for Stonewylde. He said that I could expect a surge of interest once the podcast had gone out, as it had a huge worldwide following. I was surprised at this (and I must admit, just a tiny bit sceptical – silly me!). Damh was right. After the podcast was broadcast, there was a huge spike in hits to my website from all over the world, and a flurry of e-mails, orders for books etc. And a lovely e-mail from Philip Carr-Gomm (chief Druid in the Order of Bards, Ovates and Druids) inviting me to do a guest blog for him whilst he was abroad. I was very grateful to Damh for the opportunity buy yellow phentermine 30mg he’d given me.

Damh and I follow each other on Twitter and I noted that he was going on tour to Australia. I wished him a bon voyage and have enjoyed reading his tweets whilst away, and following the links he’s been posting. But last week a strange thing happened. A huge flood of orders for Stonewylde books came from Australia. Loads of them. I was mystified, wondering if someone down under had posted a blog or something – until another tweeter suggested maybe Damh was responsible. Of course! I tweeted him and asked and he replied that he may have mentioned Stonewylde! He also said that his gigs were going very well and it could be that afterwards, people may have gone to his website and then discovered our old podcast from April. I guess that’s possible but I reckon he’s been doing a bit of PR for me. Nothing else could explain the amount of orders from Oz that came in last week.

I got to thinking how incredible the whole networking/Internet thing is. Really really incredible. Damh and I hadn’t met but he’d read my books and knew I’d be at the Wessex Gathering from checking out my website. We met and liked each other and kept in touch. He arranged an interview over the Internet, did it via Skype, and published it via an Internet podcast. I subsequently received a great deal of orders via my website, and lots of new fans and readers. Damh then goes to Oz, talks about Stonewylde, and next thing I know there are loads and loads of orders coming through. Hopefully these books will be delivered from next week onwards, and the recipients will enjoy Stonewylde and maybe tell their friends, blog about the books, help spread the word.

Isn’t it absolutely amazing how the world works nowadays?

PS to hear the original podcast with Damh the Bard, follow this link: http://bit.ly/7SNRjO And do listen to Damh’s music too!