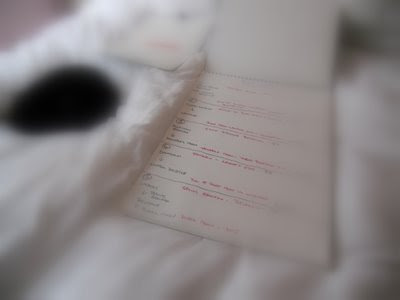 Sorry for the even blurrier photo today but this one really would contain spoilers. It’s the page where I’ve outlined the five acts of the book and also detailed the inciting incident and resolution in each. And once again you can see Magus peacefully curled up in a very useful supporting role of keeping me company whilst I plot and plan.

When I first wrote the original drafts of Stonewylde back in 2003 (I started on November 9th, just after my return from an inspirational course and experience at the Schumacher College in Devon) I had no plan whatsoever. I only had a few vague ideas about a magical, secret community into which a very special girl was brought and then exploited. In the very early stages, Yul – who’s ended up as one of the very main characters – didn’t even exist! But he very quickly made his presence felt, as all Stonewylde readers will know.

Because of the nature of the books, I soon found that I needed to plan the dates carefully. There’s a framework to the story of the eight pagan festivals of the year and this is a type of skeleton on which the whole story hangs. Without planning it to be so, I found that most of the major events seemed to pivot around the festivals. But there were also, of course, the full moons to be factored in. And then the dark moons too. I realised that I had to plan this carefully as I couldn’t have a full moon falling only two weeks after the last one! So I drew up a calendar and mapped the eight festivals (with their fixed dates) and around this I wove the lunar calendar. If the festivals are the skeleton, I guess the moons could be the nervous system.

This gave me a good framework to base the whole story upon and served me well for the first three books. I used the same format (festivals then moons juxtaposed onto the calendar) for the fourth book. But by the fourth book it was all becoming a bit complicated. Stonewylde never started out as a series – it was only going to be one book. It was my original literary agent, Clare Pearson, who suggested I turn the huge, unwieldy manuscript into three books. And it was my eldest son George who persuaded me to continue the story into the fourth book. So by this point, the canvas had become enormous. There were so many characters and so many sub-plots going on and the whole thing was pretty daunting.

It was after I’d signed the deal with Orion Books and I was working on rewriting the manuscript for the fourth book that I really wished I had some proper formal training in writing. The story was okay, I thought, but it was woolly and really lacked structure. I found it very hard to tighten it up and to be honest, didn’t have a clue where to start. I know there are Creative Writing courses – from casual evening classes to full blown Masters degrees. But I didn’t have time for that, so I ended up doing what I usually do in such cases – I bought a book about it!

Tomorrow I shall tell you about Robert McKee and how he changed everything for me. What a break-through! But now I need to get back to writing. The good news is that I’ve stopped fiddling about with my plans and have started actually writing the book (the equivalent of just jumping into the pool despite the shivering). I’ve nearly finished the first chapter! Ironically this didn’t happen in my beautiful purple writing room but in bed, in my lovely pink bedroom! And no, I’m not Barbara Cartland. I’m much better today (again, thanks for all the well wishing) and will be writing in the proper room today. I’m in there now and would you believe it, a huge fox has just trotted across the lawn in brilliant sunshine, had a quick poo, and now loped away into the trees at the end. Blooming cheek!