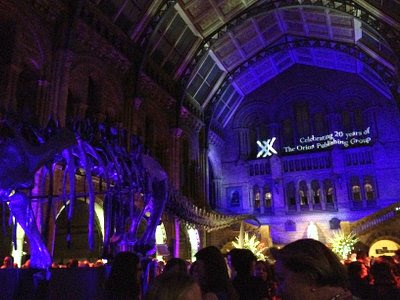 This photo comes courtesy of Nina Douglas, the lovely publicist from Orion Books. On the left of the picture, in case you didn’t realise what it was, is the dinosaur! What a fabulous, wonderful, exciting event it was.

I read somewhere that there were 900 guests and 500 bottles of champagne – not sure if that’s correct, but the champagne was lovely and there was a lot of it. And delicious canapes too. Certainly it felt like 900 guests as the place was packed. We were sent name badges (posh ones – not sticky labels) and most people wore theirs, but even so it was hard to find people you wanted to talk to, or see the names of those you were talking to. Peering at someone’s chest to decipher their name before making eye contact feels a bit rude!

I had a marvellous time despite my nerves. I was a little late (Hammersmith Flyover trouble) and in the queue to leave coats, noticed that Ian Rankin was standing behind me! He addressed the audience later, talking about his history with Orion and how just that day he’d signed another two book deal with them. He was one of the very first authors to sign with Orion when they set up twenty years ago – and everyone’s done very well from that deal!

There was also a speech from the CEO who’s a lovely man called Peter Roche. I spoke to him at the Gollancz 50th Anniversary party last November and he told me that he hadn’t read Stonewylde. Understandable really, given how many books Orion publish and that he’s firmly a crime/thriller fan. But at the party on Monday night, I bumped into him (I kept bumping into people literally as it was extremely crowded) and he recognised me and told me he’d now read all four books!!! I said, ‘Wow – I only hoped you might read one!’ to which he replied, ‘Once you’ve read one, how could you not read all four?’. I felt so honoured!

I spoke to many very interesting people, lots of new authors who looked lost, and established authors who didn’t. I had a lovely chat with Essie Fox, who’s debut novel The Somnambulist was recently featured on the Channel 4 TV Book Club and we agreed to read each other’s books. I also had a chat with Greg Mosse, who’s invited me to speak at the college where he teaches an MA in Creative Writing – that will be great, if it comes off. We started talking because my Stonewylde charm bracelet had become entangled with my lace dress – and he extricated me! I had a good chat with fellow Gollancz author Suzanne McLeod about the merits of attending some of the big conventions such as SFX Weekender, Eastercon, Fantasycon, etc.

There were several other authors I’d hoped to speak to but never found – we’d made contact on Twitter but the Natural History Museum is so huge and there were so many people that it was impossible to track down individuals – especially if you didn’t know what they look like! I did manage to talk with my agent, my editor at Gollancz and some of the marketing and PR team too, and said hello to Malcolm Edwards, head of Gollancz. So in a networking sense it was a successful evening.

But on another level it was almost like a timeslip film/novel, and this must have been the same experience for everyone there. I remember my father taking me and my younger brother to the Natural History Museum when we were children in the 1960s. I remember standing there being totally awestruck by the dinosaur and the sheer size of the place. I stood there on Monday night feeling amazed and overwhelmed that here I was, an author at a publisher’s party mixing with loads of other publishing professionals, authors, agents, etc. And I imagined that small girl standing in the same place with her father and her little brother, not knowing that one day she’d be there in such a glitzy capacity. It always was my childhood dream to be a writer, and here I was. And I bet the same was true for so many of the people there. Nobody who’d visited as a child would have any sense of this destiny. It would make a great film or story, wouldn’t it? I wonder how many of the 900 people had visited the museum as children? I wonder if this thought struck any of them too?

We were given a goody bag of books as we left (all very welcome – each one is a title I want to read) and my wonderful Mr B was waiting outside for me. We had a quick supper in a nearby restaurant with some other authors (I’ve done enough name-dropping so won’t bore you with more) and then drove back to Reading. It was a fantastic night altogether, and I’d had just the right amount of champagne too. These photos of me were taken at home by Mr B before we left.

If by any chance anyone from Orion reads this blog – thank you for a magical evening!