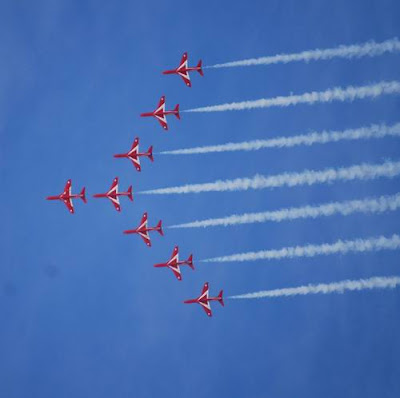 The new and the old – Red Arrows and the Three Old Faithfuls – Spitfire, Lancaster and Hurricane
I spent Saturday in Eastbourne, not Canterbury as originally planned. We’re off on our hols to Brittany tonight and the visit to in-laws had been long arranged. Airborne : Eastbourne is apparently the largest free airshow in the south of England, and a bit of a family tradition. My in-laws live right on the seafront at Eastbourne looking out over the sea – absolutely perfect viewing for the airshow.

We were meant to visit on the Sunday and I was due to be in Canterbury on Saturday. And leaving for France Monday night. But it was all too much and sometimes you have to say, “Actually I can’t do all this.” I think generally we’re quite bad at admitting this and try to do everything, which is why we’re all so stressed. So – Canterbury was sadly cancelled for me (I’d been really looking forward to the Goddess Festival, not least to seeing Damh the Bard again), Eastbourne was moved to the Saturday and Sunday was packing day for our holiday. We’re camping and cycling so there’s a lot to organise – it’s not just a swimming cossy and suncream!

The airshow was, as ever, spectacular. There’s something so very emotional about seeing those old Second World War aircraft fly past – it’s always brings a lump to my throat. I said to my young step-son that by the time he’s a father, his children would probably never see such a sight as the old originals in flight.

Maybe because I was brought up in the sixties on a diet of old war films buy phentermine 4u product info with RAF pilots and squadrons of planes flying over enemy territory and lovely young women in fitted uniforms and glossy curled hair that rolled up at the back – I can’t help feeling the poignancy and nostagia of watching these old aeroplanes still taking to the skies. My parents (both now dead) used to tell me many tales of their childhood, both living in the outskirts of London as children during the war. My father as a young boy was obsessed with fighter planes, as were many lads of that time. The house where he lived in Kingston-on-Thames, and where I lived as a young child too many years later, still had its air-raid shelter in the back garden. My father remembered digging it out with his father.

Watching these lovely old planes and then fast modern ones like the beautiful Red Arrows and the Eurofighter which gave us an incredible performance on Saturday, is such an amazing experience and one of which I’ll never tire. We had a wonderful day and the sun shone for most of it.

And now we’re almost ready to go. I’ve been frantically getting ready all day, mostly sorting out Stonewylde Harvest Moon Gathering stuff. We’ll be spending a week in Brittany and we’re planning on visiting Carnac and some of the other megalithic sites. I haven’t been clever enough to organise guest bloggers for my absence so I’m afraid there’ll be radio silence here for a week. But I hope to wow you on my return with lovely photos of standing stones.

As one of my Stonewylders said this evening, “Soak up some earth energy at Carnac, Kit. You’ll need it for the Gathering!”