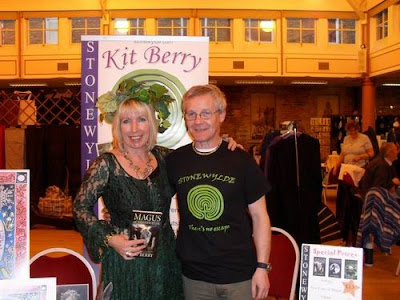 Kit and a member of the online Stonewylde Community 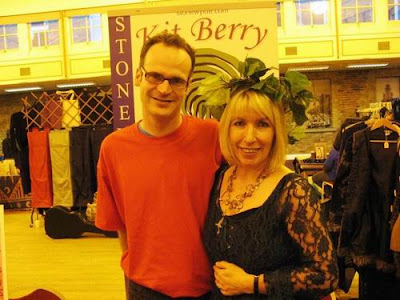 Kit with Darren – an organiser of the conference 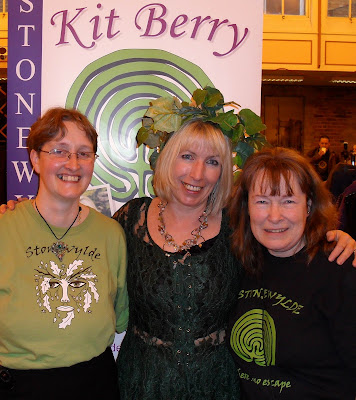 Two of the Stonewylde Promo Pixies in action!
Darren is an avid Stonewylde fan, and as one of the organisers of the East Midlands Pagan Federation annual conference, he’d invited me last summer to take part in the event to be held this March. I’d gladly accepted, not realising the date would clash with Mr B’s daughter’s birthday. So this was to be one of those rare occasions when I had to go it alone, for Mr B couldn’t let his children down for the birthday lunch, and I couldn’t let Darren and his friends down either.

Don’t get me wrong, I’m not a feeble woman who can’t go anywhere without her husband! In fact anyone who knew me before I met the man of my dreams back in 2005 will laugh at the very idea. I was the most independent, single-minded woman alive who laughed at romantic couples, mocked people who referred to their “other half” and had no intention whatsoever of succumbing to what old Frank Sinatra referred to as “the tender trap”. That was before I fell in love. Since then, Mr B and I spend every available moment together (given that he works very hard and very long hours during the week) and we’ve had some wonderful times travelling all over the country and abroad on Stonewylde events.

Mr B was, initially, a little out of place at some of these events. The world of book signings, gatherings, MBS fairs etc was not one familiar to him. But gradually he’s mellowed from the IT business man that he is into the top-hatted Stonewylder whom many of you have now met at various Stonewylde events. And just wait till you see his costume for the forthcoming Elf Fantasy Fair in the Netherlands next month! But anyway, I’ve become accustomed to having him drive me all over the country, unload all the paraphernalia and set up the Stonewylde table, and look after my every need when we’re “on the road”. He’s brilliant – the best, most supportive partner imaginable and I’m spoilt rotten. Hence my apprehension last weekend when I had to get to Lincoln all on my own and do the whole thing without him.

I spent the night before the conference with my dear friend Wild Roses (she of the amazing jewellery talent – see my necklace above – who’s going to make our Stonewylde pendants) who lives about 40 miles away from the venue. I got lost twice driving to her, having left three hours late due to my fussing around trying to pack everything. And even then forgot the camera – the photos above are thanks to Darren and one of the Stonewylders who sent them to me so I could post this blog! Wild Roses and I had a lovely evening indulging in the pink champers for which she is so famous, despite Mr B’s warnings to both her and me to be sensible. We were.

The next day I had to leave at the crack of dawn to get to Lincoln in good time to unload all the stuff, set up the Stonewylde stall and get changed into my appropriate garb. I’m not a morning person. Normally Mr B would have organised me and bundled me into the car still mostly asleep, giving me time to wake up slowly during the journey, stopped for coffee somewhere to further the revival process, and then dealt with everything on arrival so all I had to do was find a loo and put on a bit more lipstick.

Aarrgghh! I found Lincoln easily enough, amazed by the sight of the massive cathedral perched on the hill. And then promptly got lost. I can’t work our sat nav. I know that sounds feeble, but it’s temperamental and confusing, and actually wouldn’t have been a huge amount of use as the area around the venue was all diversions and blocked order phentermine online cheap roads. So having arrived in the city in incredibly good time, I then spent the next hour driving round and round, completely lost and becoming more stressed out and desperate by the minute. And then, when I did find the place at last, I was told there was no parking left.

“But I’m Kit Berry!” I wailed like some awful wannabe celeb. “I’m talking here. I have books to unload!”. I even threatened, in the most dreadful hissy-fit imaginable, to just go home. But a kind organiser found me a parking space and helped me unload. I was shaking. The event was due to open in ten minutes’ time, and I wasn’t even changed! Let alone unpacked. “Oh Mr B – where are you when I need you?” I moaned (inwardly).

Then I saw a tiny wren on a branch right in front of me. It was beautiful, and very close up. I calmed myself down and got everything inside and set up the Stonewylde table with piles of books, my labyrinth and hare who accompany me now on every jaunt, and my banner. I dashed to the loo, transformed into my author persona complete with long lacy dress and foliate head-dress, and phew, was miraculously all ready for the conference. I breathed a huge sigh of relief, gulped down some coffee and breezily texted Mr B that I was all set up and ready to go and I hoped he’d have a lovely day with his birthday girl and other children.

It was a great day. And I wasn’t alone, as you can see in the photos above. My magical Promo Pixies turned up – three of them! They looked after my table when I needed the loo and did my talk, and generally hung around and supported me. I saw the gorgeous Damh the Bard again and was rewarded with another of his massive bear hugs, which was particularly exciting as I’d been listening to his latest album “Tales from the Crow Man” all the way up in the car. It’s brilliant, by the way, and I’d thoroughly recommend it. I had a long chat with Colin and Karen Cater of Hedingham Fair, who produce stunning cards, ceramics, T-shirts and books, and who are Stonewylde fans themselves. I met lots of really interesting people including Tony Bates who photographs hares and other wildlife so beautifully, and generally had a fantastic time.

I really enjoyed giving my talk, unhampered this time by a great stage, lights and microphone as at the previous event. The audience were so responsive, and dear Darren was right in the front row looking all excited every time I read bits out of the books. It turned out that there were absolutely loads of people at the conference who’d read Stonewylde, and many of them had brought their well-thumbed copies of the trilogy along for me to sign, which was a pleasure.

My only regret of the day was that I couldn’t stay for the evening and listen to Damh the Bard play. But I had a long drive back down to Reading, without my usual chauffeur of course, and was very tired. And the pink champers of the previous night was somewhat taking its toll. So I packed everything up, assisted by my pixies, and set off into the darkening evening.

I only got lost (properly) once on the way home. I was very very glad when I finally rolled up outside our house. I proved that I could do it alone (well, almost alone if you don’t count the three pixies) but it’s not something I really want to prove again. I’m a very lucky woman to have Mr B to look after me, and last Saturday brought that home. Thanks to those who did help, and to Darren for inviting me. And I hope one day to visit Lincoln again under less stressful circumstances as it looks like a beautiful city. Complete with wrens.