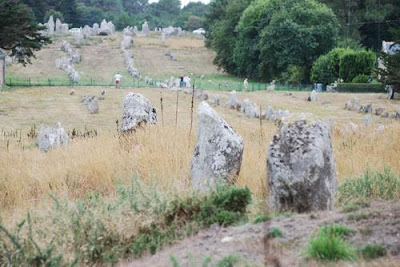 The amazing megaliths of Carnac – a small selection 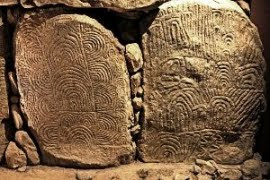 Just two of the beautiful carved stones inside the passage tomb at Gavrinis.
Photo courtesy of Guided Tours France as normal photography is forbidden inside. 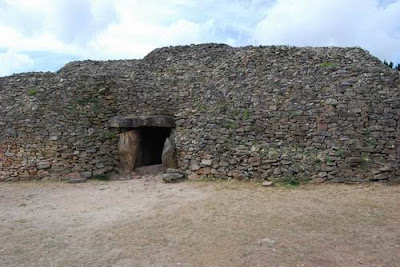 Exterior and entrance to the cairn on the Island of Gavrinis.
Any photo of Carnac can barely do it justice. This has got to be one of the most amazing sights (and sites) ever. Rows and rows of standing stones, some much taller than a man and some smaller than a toddler, march across the landscape in long wobbly lines. There are gaps (deliberate or the passage of time?) and dolmens off to the side, and from nowhere apart from the sky can you get a picture of the whole thing.

I visited Carnac seven years ago with two of my sons, on a cold and leaden-skied day in August. We parked and looked (in the height of the season you can’t wander amongst the stones – too much erosion) then parked a bit further on and looked again. It was impressive and enjoyable but I didn’t really get a sense of the size of the site. This time I saw Carnac a much better way, and one that I thoroughly recommend. We parked the car at the far end, away from the Visitor Centre, and we unloaded our bikes from the roof. Camera at the ready, we then spent the next three hours or so until after sunset exploring on our bikes. This was the most brilliant way to see and appreciate the full splendour of the stones.

First we found a sunken dolmen (more about this in my next blog – which will be my last on Brittany for a while as the Gathering looms!) and then we cycled the 4Kms along the road and sometimes off-road on the paths all along the highway of stones. We climbed the little tower for a better view and even managed at one point to get lost in some woods. It doesn’t take much where I’m concerned, having no sense of direction at all. We popped into the Visitors’ Centre just before it closed and quickly watched an amazing film about Carnac. I didn’t understand a word but the images were stunning. And Mr B bought me a very pretty T-shirt which featured a pattern from the other mind-blowing place we’d seen earlier.

We then cycled the whole way back along the road, and the sun which had been coy all day decided to blaze out in August glory, casting golden light onto the stones and creating long hazy shadows as it sunk lower in the sky. It was the most lovely cycle ride back and I really would recommend this as being the best way to experience Carnac, other than perhaps a helicopter of course. And that would be too noisy anyway.

The other place we visited earlier this day was somewhere else I really recommend (I can feel a Stonewylde tour of the Sacred Sites of Brittany coming on!) – the Island of Gavrinis, in the huge Gulf of Morbihan. This is only reached by boat, and is a tiny online pharmacy to order phentermine uninhabited island. In the centre is a great mound – just like any old hill really – but it hides an incredible secret. It’s actually a cairn covering a passage tomb, and the front has been exposed to show the incredible stonework. It reminded me a little of the old air-raid shelter we had in our back garden in the house where I was born. From the outside and the back, all you could see was a mound of earth and grass. However the likeness stopped there – the cairn had a massive diameter of 50 metres with no corrugated iron in sight!

Inside, the passage was about 14 metres long, and completely stone lined. Great blocks of smooth stone form the floor, whilst the walls and ceiling are made of similarly enormous stones but these are intricately decorated. The patterns are beautiful and I longed to take photos, but this was forbidden. The carvings are so delicate and cover every bit of each stone. The passage tomb is lit by tiny floor lights so it was quite dark and very atmospheric indeed. I had to stoop in places but at the end, in the widest bit, I could stand fully upright (although I am only 5′ 3″).

Everyone talks of these places being graves and tombs, but I can’t help but feel myself that perhaps they served other purposes too. I felt very humbled and emotional inside, especially because I was very naughty and whilst the French guide was explaining things outside to the group, I sneaked in alone and stood there for a few minutes in the womb of stone entirely alone. I tried to open my mind to the ancestors who’d built such a mind-boggling place and had spent so much time and effort making it beautiful.

Apparently the cairn at Gavrinis was built about 3500 BCE, before New Grange in Ireland and Stonehenge in England, and about 1000 years before the Great Pyramids of Egypt. Despite the massive exterior diameter of 50 metres, the inside part is quite small and only 2.5 metres at its widest point at the end. It was used for a long time, but then abruptly many hundreds of years later was deliberately sealed off and hidden away under its mound of earth, looking for all the world just like an innocent hillock.

Just to complete our little history lesson for Mr B (and anyone else not sure of these terms – including me!) – a cairn is a man-made pile of stones often used to mark a burial place but with many other uses too, often just monumental. A passage tomb or grave is what it says – a passage or corridor leading to a burial chamber, sometimes with side chambers too like the one at West Kennet near Avebury. I’m still not happy about classifying these places as graves, despite remains having been found in them (usually from a much later date, I believe). I feel that they were used too for ceremonies, magic, rituals – shamanic journeying perhaps. But maybe that’s just me being silly and fanciful.