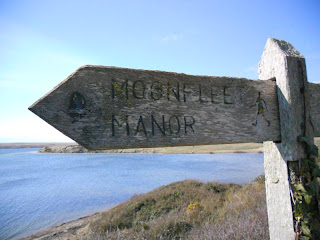 I’ve told many of my Stonewylde readers about my next project, which is an historical novel set on the Isle of Portland during the Civil War.  But in the meantime, I’ve started writing an adventure book for 9 – 12 year olds.  I have actually written the first chapter (always the hardest part in my opinion) but I needed more information.  The book (which could potentially be a series) is set on the Fleet in Dorset, the setting for John Meade Falkner’s wonderful classic Moonfleet.

So on Easter Sunday, Mr B and I set off to spend the day exploring the area.  It’s amazingly beautiful!

I read Moonfleet as a child and really enjoyed re-reading it recently. Falkner used quite a lot of artistic licence in describing the village and surrounding area.  He wrote the book at the end of the 19th Century, but set it during the 18th Century, before the Great Storm of 1824 which destroyed several houses in the village of Fleet, and a large part of the church.  Visiting Fleet today (both east, west and in the middle) there’s very little there in terms of buildings. But I’d already decided that I’d be inventing my own places for my books, not wanting anyone to think I’d used their house as inspiration!

The name Moonfleet is in fact J M Falkner’s invention – the body of water is known as the Fleet (from a Saxon word) and the tiny hamlet is of the same name.  For several generations the land was owned by the Mohune family (around the time of the Civil War – so this is very relevant to my adult novel!) and Falkner amalgamated Mohune Fleet into Moonfleet.  The house was originally known as Fleet House, but has since been renamed Moonfleet Manor (far more romantic) and is now a hotel.  We started off our day with a coffee in the lounge. It’s absolutely wonderful there, despite the poor stuffed animals – a legacy of a bygone era when hunting exotic animals was considered perfectly acceptable.  I wish we could afford to stay at the hotel, but the coffee was lovely and maybe one day we’ll splash out and treat ourselves.

We ate our picnic in the lea of the ancient wall around the manor house.  It was beautifully sunny but the wind was biting, and we needed the shelter.
I took hundreds of photos, trying to imagine scenes in my book and looking for just the right spot to place the cottage where the children come to spend their summer holidays.  I was keen to know if it were possible to swim in the Fleet, and how safe it would be. There were many little beaches, some stony and sharp and others full of sludgy mud.
We were absolutely freezing after a couple of hours out in the wind, and made ourselves a very welcome cup of tea in the car!  A slice of homemade ginger and date cake went down very nicely too.
Then we found the old, original church – or what was left of it after the Great Storm of 1824.  It’s an amazing  little place – really lovely. This is where Falkner described the Mohune vault where poor John Trenchard grabs a handful of beard from a coffin, and where the smuggled barrels bump together when the vault floods during a Spring Tide.
From the Fleet, the views of Portland are amazing.  What’s so good is that all my research and atmosphere-soaking-up can be shared for the two books – adult and children’s.  This area really does fill me with excitement and something that sparks off my imagination and creativity.
And then, towards the end of the day when we’d seen so many fantastic views and interesting things, we saw something that filled my heart with joy and made me absolutely sure that this was the place to set my children’s book.  The first ones I’ve seen in a long time – and many of you know just how important this creature is to me.  The quality of this photo is poor as they were in the distance and we couldn’t get closer – I’ve really had to blow up the image.  See how the one on the left is stretching like a cat?  So beautiful, and the perfect ending to a perfect day!
Share this
0 likes
Related Articles
7 Comments