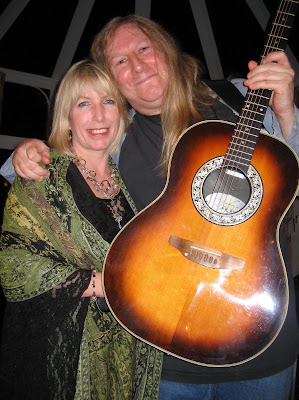 Kit with Damh the Bard (and his big guitar) 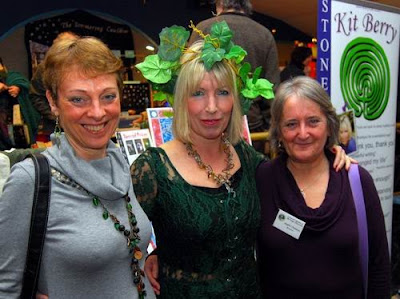 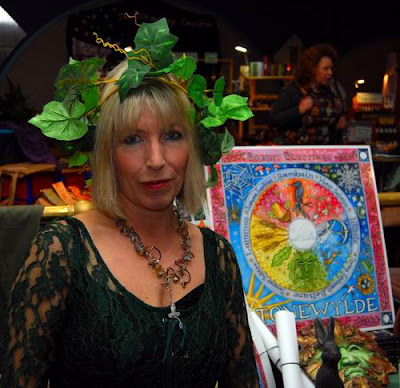 Kit and the Stonewylde Wheel of the Year

I’m so sorry about the delay in posting a blog – I felt horribly guilty when I saw the date of the last one! Where is this year going? Thanks to a nag from one of my most ardent supporters, Cornmother, I’ve finally come to write this. It’s been a bit of a hectic few days actually, and today I was interviewed by a lovely reporter from the magazine Spirit & Destiny. She came to have lunch with me in Reading, and I told her all about my experiences with Stonewylde. She loves the books and is doing a feature on three women who’ve had strange spiritual experiences which changed their lives and set them on a completely different path. This feature will be in the July issue, which comes out at the beginning of June. I’ll remind you nearer the time!

Well, latest Stonewylde travels were to Bude in Cornwall. I’d been invited to speak at the Pagan Federation Conference down there – the branch being Cornwall, Devon, Channel Islands and Scilly Isles. This has the reputation for being one of the very best organised PF conferences (I’m sure they all are actually!) and Levannah booked me to speak there way back last summer I think. Mr B and I were accommodated for the whole weekend in a wonderful apartment in the old manor house at the hotel holiday village – Penstowe Manor Hotel. We were looked after from the moment we arrived on Friday. It really was the most fantastic weekend.

We swam in the lovely indoor pool on the Friday afternoon. Me, without glasses, doing my swan-swimming (any woman of my age knows exactly what I’m talking about) when a voice calls, “Kit! Kit! Hello – it’s Angie!” I couldn’t even see the person, let alone recognise her. But of course, once she’d told me her “forum” name I knew immediately who she was! It was such fun to be there and everyone was so friendly. Damh the Bard and his lovely Ceri arrived and we had a wonderful evening listening to his music in the bar. He really is a very talented man.

Saturday was busy from the start. The big hall (called The Cabaret Suite) was packed with stalls of a very high standard. So tempting! I came home with all sorts of wonderful goodies. The word “Cabaret” was lit in pink neon lights, and every purchase phentermine canada time I looked at the stage and then at Mr B’s top hat, I had an overwhelming urge to don my fishnets and false eyelashes and do a Sally Bowles impersonation, only having seen the film again recently on late night TV. “Wilkommen, bienvenu, welcome!”. Oh, one day ….

There were four speakers booked for the day, and I was on third. What some call the graveyard slot – straight after lunch when everyone’s supposedly sleepy and lethargic. But it was fine, although the lights were dazzling, the hand-held mike heavy, and the audience large. I must admit, speaking to an audience of over 200 people for an hour was quite a daunting prospect as I’m generally used to speaking to groups of no more than fifty people. It’s a strange thing, public speaking. In my younger days it was one of my most feared things of all – on a par with facing a wild rabid dog or having a tooth filled without an injection first. But over the past couple of years I’ve become used to talking to a large room of people. However, standing on a stage unable to really see people because of the lights, hearing your voice booming out through a loud speaker – this was quite scary, and I wasn’t as natural or spontaneous as I normally try to be.

But I think generally people enjoyed my talk. However the talk which followed mine, and finished the day’s events, was wonderful. Cassandra Latham introduced Penglaz, and I’m sure I wasn’t alone in finding my skin crawling and my scalp tingling. I’ll explain more about Penglaz in another blog (and it won’t be long in coming, I promise!) as it’s a wonderful thing that deserves a proper mention.

Later, Mr B and I had dinner with Damh and Ceri, which was fun. The evening was rounded off with a brilliant performance by The Dolmen, the folk band from Dorset. It was so good to see them again and have a chat with some of the band members (who are Stonewylde fans too!). It’s a small world really and meeting up with so many readers over the weekend, from all parts of the country, brought this home. The highlight of the evening had to be when Damh joined The Dolmen on stage for a very rousing rendition of Raggle Taggle Gypsies-O.

I went to sleep again with the Cornish moon shining on my eyelids and waking me in the middle of the night. Magical!