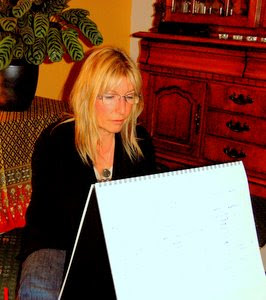 Well here I am, hard at work on the story planning board for Shaman of Stonewylde. As I’ve said before, with such a broad canvas and being the fifth and final book, it’s very important that I can see the whole picture, or at least a big part of it. I need to make sure the balance is there, between the characters, the conflict, the setting and the action. No longer do I have the comfort of knowing that I can put that bit right in the next book – there won’t be a ‘next book’! All ends have to be tied and yet not in a trite, happy ever after type way. Tricky stuff, but I’m getting on with it and after Monday’s doldrums, it’s started moving again. Phew! 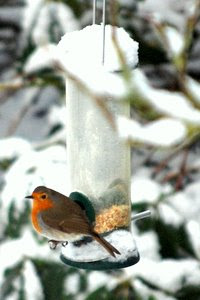 I realised that one of the issues was this handfasting scene I’m trying to write. Several of my lovely readers are going to tie the knot in Avebury in May, at our annual Stonewylde gathering. I rashly said to them a long time ago that when I’d written this particular scene in the book, I’d let them have the text to adapt it for their own handfasting ceremony. So Chapter 7, the handfasting one, caused a massive block in my thinking. I was trying to write it for Avebury, for the Stonewylde fans, instead of staying true to the story itself. Once I’d realised this and overcome that hurdle, the chapter flowed and I’m now on Chapter 9. I’m sure the four couples who want to use my ceremony in Avebury will be able to adapt what I’ve written, and the log-jam has now freed itself and all is flowing again. 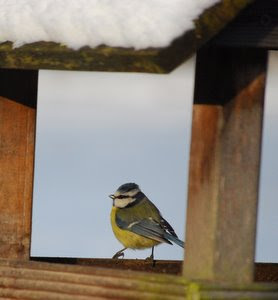 Since last weekend’s snow, we’ve had more. The little robin above was snapped by Mr B this morning as he tried to grab some breakfast. I thought robins were ground feeders and wouldn’t use these type of seed feeders, but obviously I’m wrong. We have several robins who visit us for food, which again flies in the face of what I’d always believed: that the robin is territorial and guards his place fiercely. Maybe the snow puts paid to all that and in the end it’s only survival that matters.

We’ve had lots more avian visitors this week – in fact it’s become quite ridiculous. I counted eight blackbirds today, and there could have been more rustling around in the leaves at the end of the garden. They’re very bold, and I know they’re plain birds but I do love them. We’ve also had a crazy amount of blue-tits, so much so that I actually wrote a blue-tit into the story today. I suddenly realised what I’d done and it made me laugh. Just as Baba Yaga has also appeared, after the wonderful blog post that I linked to on Katherine Langrish’s site. This has been a week of discovering some really amazing blogs. Of course I can’t allow myself to be distracted as I just don’t have the time for that, but how can I resist? In my next post I’ll do some links to these lovely sites so you can all go off and explore them. I feel quite inadequate when I see what some people produce on their blogs. I must say this was one of the reasons I stopped blogging during 2011 – I felt I had nothing to say that would be of any interest. Now I’m starting to think that actually, a bit of rambling may be okay after all. I guess all blogs are different; some erudite, some clever, some entertaining. Mine’s like you’re popping into my kitchen for a quick cup of tea while I take a break from writing the fifth book.

So on that note, I hope you like this very acrobatic woodpecker who was just showing off to all the pigeons and magpies who couldn’t get to the birdfeeder. I have filled up the feeders now, by the way, in case you were wondering about the dearth of food. Our garden has been awarded two Michelin stars by the local birds, and I had to keep running out flapping my arms at the flock of seagulls (yes, in Reading!) who kept trying to land today. They mistakenly took us for a drive-thru. It’s back to work for me (10pm but that’s no reason to leave Sylvie on the hill and Yul in the Barn) and I wish you all a lovely weekend. On Monday – hopefully – I’ll tell you about the wonderful blog from Weymouth of all places (my old home) that I discovered today via good old Twitter, and how I’m now a tree follower. Can you let yourselves out and shut the door behind you please? Bye!