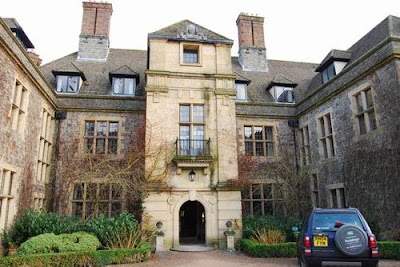 The grand facade of Llangoed Hall 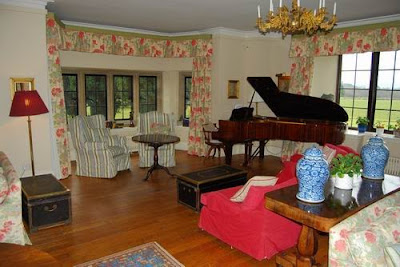 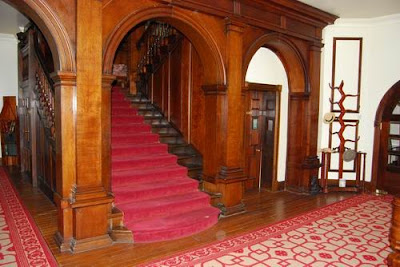 Wonderful proportions of the staircase -and note the hat-rack! 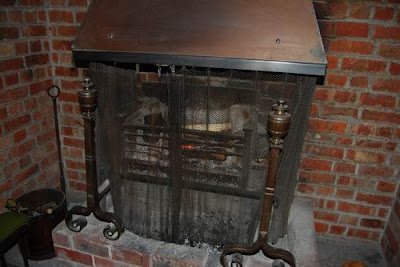 The metal fire-curtain – a strange coincidence

Mr B and I recently spent a weekend at a beautiful hotel in the Brecon Beacons – Llangoed Hall. The place has a very interesting history and was apparently originally Llangoed Castle, possibly the place of the first Welsh parliament and documented since the year 560. The mansion dated from 1632 and changed possession many times including once in the 1800’s as the result of a game of cards – very Georgette Heyer! In 1912 it was rebuilt by Clough Williams-Ellis, of Portmeirion fame, as a great country house. His architectural plans can be seen framed on the walls upstairs. A little of the Jacobean mansion was retained, but overall it feels Edwardian – well-proportioned and spacious.

We’ve travelled all over the place and stayed in a vast number of different and lovely hotels, but Llangoed Hall felt very special indeed. It has such a chequered history, the most recent bits of which can be read about in a scruffy old scrap book in the Drawing Room. The great house fell to rack and ruin, mostly due to the cost of upkeep and heating, and in the 1970s the owner tried to get permission to demolish it. Luckily that was refused but because of the huge amount of renovation required, a new owner wasn’t found for many years and the place became even more delapidated. There were apparently all sorts of shenanigans going on with bids and things, and eventually Sir Bernard Ashley, husband of the famous Laura, bought the ruined place in 1987. He spent millions renovating, rebuilding and turning the place into a luxury hotel with the feel of an Edwardian country house. According to press-cuttings in the scrap book, there were many people who didn’t like what he did as some of his alterations were very sweeping. However, as you can see from the photos above, the end result is absolutely stunning. I love old places like this.

Just before our weekend away I’d finished reading “The Little Stranger” by Sarah Waters. I really enjoyed the book, which was shortlisted for the Man Booker Prize in 2009, beloved by Dovegreyreader the famous book blogger, and was the first book to be featured recently on the replacement for the Richard & Judy book show – Channnel 4’s TV Book Club. In fact Sarah Waters had been at Port Eliot LitFest last summer when I was there, but sadly I was too busy doing Stonewylde to be able to listen to her talk.

The Little Stranger is a very disturbing read. It’s a long time since I read anything that frightened me so much that I was scared to turn out the light (and not dare go to the loo!). It’s a modern Gothic ghost story – modern but actually set just after the Second World War. It’s complex and intriguing, working on many different levels which I won’t pontificate about here as this is not a book review blog. But apart from enjoying the thrill of a well-written supernatural tale and the craft of an excellent buy phentermine 37.5mg author, I loved the period detail. The post-war period is not one often featured in historical fiction, being far less glamorous than the war years themselves, or the inbetween war years either. Sarah Waters’ observations on class and society, and her examination of the decay of a way of life that had vanished by the end of the century made fascinating and compulsive reading.

So when I arrived at Llangoed Hall for our weekend stay, my head was still spinning with ghosts, large country houses and all sorts of period detail. Reading the scrap book about the history of the place really put me in mind of Hundreds Hall, the stately home in The Little Stranger. Both had suffered dreadful decay and neglect, and but for Sir Bernard Ashley, Llangoed may have gone the same way as the doomed fictional mansion. I was delighted, on entering the beautiful Drawing Room, to discover a metal fire-curtain in use. In The Little Stranger, Waters describes a metal fire curtain in detail and although I’d never seen or even heard of such a thing before, I’d been able to picture it clearly. And there was one for real at Llangoed Hall!

Another strange coincidence that weekend happened on the Saturday night. We’d spent a wonderful day out walking in the Brecon Beacons, scrambling into a huge cave mouth, discovering waterfalls and exploring the wild landscape. We’d enjoyed a luxurious bath, dresssed for dinner and eaten a delicious meal. The service in the restaurant was pretty awful – the only negative thing about the hotel – but by changing our booking to an earlier slot we managed to eat at a more reasonable time than the previous night. Unfortunately I’d almost engaged in a punch-up with the man on the table next to us, who was noisily texting during the meal. Poor Mr B has to constantly avert disasters when I get on my high horse! But all was now well, and we were sitting in the Drawing Room near the blazing log fire and its metal curtain that delighted me so, drinking coffee and eating petits-fours.

We got chatting to another couple and had been speaking for about half an hour of this and that, when something jolted in my memory. It turned out that the woman was someone I’d met in Italy, on a holistic holiday, four years ago! We’d only known each other for a week and hadn’t seen each other since, but something was said that made both of us suddenly remember each other! It was very strange – and then we spent the next two hours catching up. This really was an unexpected but very welcome twist to our special weekend away, and she and I shall now make sure we keep in touch.

I felt a real reluctance to leave Llangoed Hall, and I’m pretty sure I shall go back there again. There was something quite compelling about the place … I’ve since discovered that it’s said to be haunted by a boy who committed suicide there in the 1940’s. Now I wonder if Sarah Waters has visited the place?