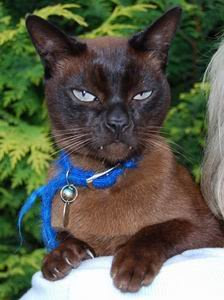 I can’t believe the last blog I posted was back in April before our house move. Well, actually I can because so much has happened since then and it’s been an incredibly hectic time for me. The first hurdle to stop me posting (and being active on the Stonewylde Forum) was the lack of broadband for over two weeks after our move. I felt like I’d lost an arm, not having the Internet, but moving into a new house and doing everything myself because poor Mr B has been snowed under with work certainly managed to fill my days and nights.

It took ages to start clearing the backlog of e mails etc when we finally did get onto the Internet, and just when all was seeming to go well – we were burgled!! This was the most awful experience, and I want to share it with my readers in the hope that maybe I can prevent it happening to someone else.

The thief(ves) broke into our house whilst we were all asleep upstairs. I have two of my children home for the summer from uni, and we all slept through the break-in. Hardly surprising when we were told the next day by the police (who were absolutely brilliant incidentally) how the thieves got in. We have a new uPVC front door, which locks when it’s shut so you can’t get in from the outside without a key. What our landlord didn’t tell us, because he didn’t realise either, is how easy it is to poke a metal device through the letterbox and open the door by simply pulling down the handle from the inside! That easy. Seems so obvious now, but it never occurred to us, nor anyone else I’ve told about it. The police say they have several of these burglaries a day – commonly known as “letter-box thefts”.

This burglary has really got to me. It must be awful coming home and finding your house trashed. But believe me, it’s horrible too knowing that people have been creeping around your house in the dark whilst you’re asleep. We’ve become paranoid about security, checking every window and door lock several times before we go to bed. It’s horrible. When I lived in Dorset I often didn’t even lock the house, that’s how safe I felt. But not now – and we’re not even in a rough part of Reading.

Anyway – where does Likky come into all this? He’s one of my two Burmese cats – very beautiful and absolutely tiny as he was the runt of the litter and not expected to live. He’s very vocal, very affectionate and to be honest an absolute pain at times, with sharp non-retractable claws and a deafening purr. He adores Mr B and greets him every evening on his return by jumping up onto his shoulder (and he’s a tall man) and sitting there like a parrot lovingly chewing Mr B’s ear-lobes! He’s also quite timid, unlike Magus my other cat who’s the terror of the rodent and bird population.

On the night of the burglary, I was woken up in the small hours by a terrible noise outside our bedroom door – yowling, miaowing, claw scratching – and stumbled out of bed in the dark. I was still mostly asleep and confused as to how Likky (short for Malik) had got into the main part of the house. The cats are shut in the kitchen and utility room with a cat-flap for outdoor access, and can’t get onto the landing outside our door. In the dark, I grabbed him and told him off and staggered can i buy phentermine in thailand downstairs to put him in the kitchen. I was surprised to find the front door open but being so much asleep, merely shut the door and went back up to bed.

It wasn’t till the next morning when I went to use my laptop that the awful truth dawned. The thieves had stolen both Mr B’s and my laptops from the sitting room. But that was all they’d taken. The children’s games console, our wallets with credit cards, car keys, phones, cameras etc etc were all still there. And it’s my firm belief that when the thieves got in, Likky ran in too and came straight up to us. He made so much noise and then I got out of bed (we have a creaky floorboard too) and I think this scared them off. I could have actually walked in on them! And they could have completely cleared us out, including our cars. Good old Likky! He’s our little hero now – although he’s still not allowed to sleep with us at night!

Not having a laptop is dreadful. I used mine all the time, as did Mr B. One Stonewylde fan, on hearing this story, thought perhaps it was someone trying to get their hands on Book Four!!! Luckily all my Stonewylde stuff is backed up, but we’ve lost a lot of software that’s installed on our laptops and all sorts of other things that aren’t backed up. The very worst thing out of all this is that the insurance company are doing their very best to dismiss our claim, and the way things are going I think we may end up with nothing at all.

It really is unbelievable how they can do this. Obviously we’re fighting it all the way, but there’s a very very tiny clause in the small print that says if the house is rented, there must be signs of violent and forced entry for them to allow the claim. I’ve spoken to the police again and they assured me that what happened to us was a forced entry. The fact the thieves didn’t have to smash the door in doesn’t alter this. What constitutes violent entry exactly? The insurance company are very vague about this. They have been so unhelpful and so difficult and it’s made the whole traumatic experience far worse. I’d love to hear from anyone who knows about this and has any advice. We’re still waiting to hear from them, but it’s now been dragging on for five weeks. And we’re still without laptops which is terrible. We fight over the PC (makes me think of the bad old days when it was me and my three teenage boys all vying for the PC) and it makes life difficult for two people who work constantly on computers.

My writing has completely ground to a halt as I always write on a laptop. I find desktops ok for correspondence but need to be in a relaxed comfortable position to actually create stuff. Doesn’t that sound very arty-farty? But it’s true I’m afraid. I wrote a lot of the first three books lying on the sofa with the laptop on my stomach!! Hopefully the insurance issue will be resolved one way or another soon, but in the meantime it’s been difficult, hence my lack of blogging, lack of forum participation etc. Sorry everyone!

And three cheers for little Likky!