Kernowkopia at The Sands Hotel, Newquay 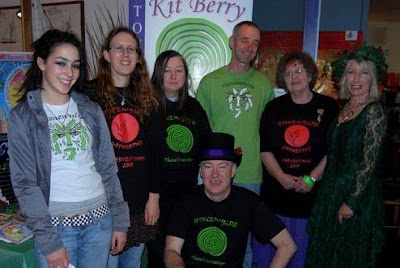 A fantasia of fans – wearing four varieties of Stonewylde T-shirt! 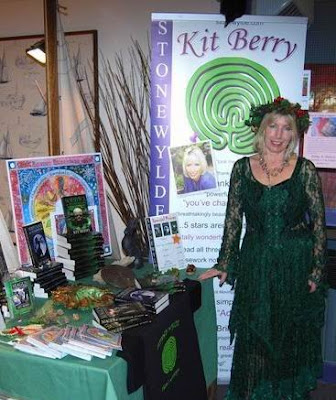 Our lovely spot at Kernowkopia 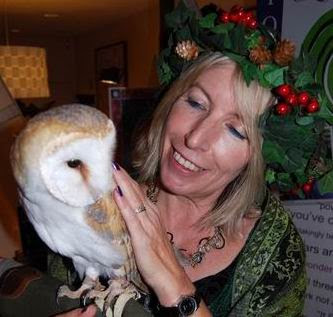 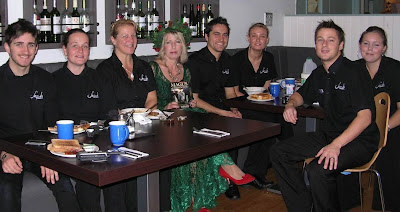 The brilliant staff at The Sands Hotel, Newquay eating their breakfast
Photo courtesy of Cornmother
Last week was a West Country treat for me. I spent Thursday with Chris Salisbury of Wildwise on Dartmoor, learning about the Earth Walk and chasing rainbows. On Friday I appeared on Judi Spiers’ show on BBC Radio Devon, which was great fun. She is a real Stonewylde fan – on arrival I bumped into her in the loo (she has to dash in there while the news is being read) and she said, “Oh, Kit – bright blessings!” She was disappointed that the fourth book isn’t yet out but was hopefully mollified by her new green labyrinth Stonewylde T-shirt. She told me that she wears her green man one to the gym and it’s attracted a lot of comments.

After the interview and a lovely lunch with some family members in Exeter, I drove down to Newquay in readiness for Kernowkopia. This is billed as “Cornwall’s biggest new age festival” and this was its second year now at The Sands Hotel at Porth, just to the east of Newquay. I picked up Mr B from the airport in the evening and we spent the evening relaxing with Cornmother and her Other Half; she’s one of our early and most loyal of followers.

Bright and early on Saturday we joined Bo and Carolyn and a whole host of people at the gorgeous Sands Hotel. We were so impressed with the venue, which was beautifully decorated and spacious, but most of all with the staff. We’ve visited a great number of places this year and can honestly say that the staff at the Sands were the most courteous, cheerful and pleasant of all. Nothing was too much trouble and they were all so very buy phentermine weight loss polite. And the prices for food and drink were very reasonable indeed.

The next two days were a whirlwind of meeting readers, talking to people and selling books. The festival was well attended and Bo had given us a lovely spot, meaning we could chat to everyone who came in. So many Stonewylders had made the effort to meet up over the weekend, and many of them wore their special T-shirts. It was really wonderful to see them all there.

I gave a talk on both days of the event and many people attended. I really enjoyed the talks, as the audiences were receptive but interesting themselves, raising good points and continuing discussions after the talk was finished. By the evenings I felt quite exhausted from so much talking!

One of the highlights for me was making the acquaintance of a beautiful python and barn owl from the Porfell Wildlife Sanctuary. We did some shopping for presents for Yule at the lovely stalls, and I was measured for a dress to wear at the Elf Fantasy Fair next year at Beltane. It’s going to be beautiful.

We had a long drive back to Reading after Kernowkopia had finished, but it was with happy hearts. Mr B and I had had the most wonderful weekend at the festival. We’d sold lots of books which always makes me feel good as I imagine people going home, opening the first page and entering the world of Stonewylde. That thought gives me such a thrill! Many thanks to Bo and Carolyn for their brilliant organisation of the festival, to Cornmother and OH for their generous hospitality, and to all the lovely people who came along to meet us. This was our last event of the year, and in fact my last one until March as I’m taking a break from all this gallivanting around the country. It was good to finish on such a high!