Isle of Wight – a tantalising taste 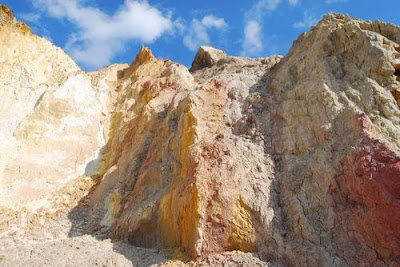 The incredible colours of the rock at Alum Bay 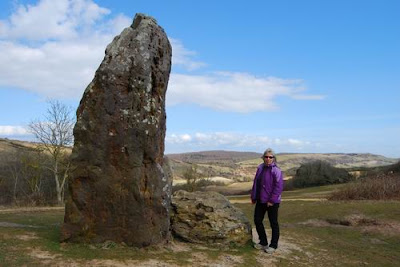 Kit at the Longstone at Mottistone Down 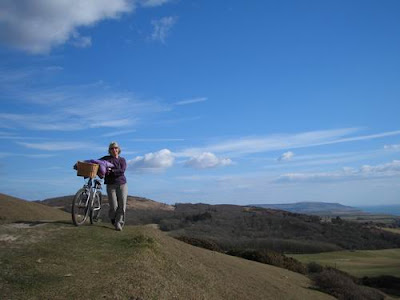 Cycling along the Tennyson Trail towards the Needles
Last weekend Mr B and I had three days off and spent his birthday on the Isle of Wight. Neither of us have visited the island since about the age of eight, and had no idea really what to expect. Last year Mr B was given a mountain bike by his family for his big birthday (and so I had to have one too of course!) and it seemed fitting, now he’s two stone lighter and in such better shape, to spend this birthday on a cycling weekend. I’d read that the Isle of Wight is one of the best places for cycling, so off we went, feeling almost as if we were going abroad as we sailed across.

Truth be told we only spent one of the three days on our bikes! That was quite enough, for we hadn’t chosen one of the many flat and easy trails that form a web across the island for our debut bike ride of 2010. Oh no – we went on a very challenging route along the Tennyson Trail, which follows an ancient track along a ridgeway, like the spine of the island. Mr B was very good, but I must admit I ended up pushing my bike on most of the very steep uphill bits, and then chickening out and creeping slowly down the sharp descents, my brake blocks biting hard. Not so Mr B – hardy creature that he is. Bombing up hills, whizzing down them again! Although he could hardly move that night and certainly needed his massage at the spa hotel where we stayed! I think he slept for about ten hours that night.

We had a brilliant, magical time. The weather was glorious, as you may see from the photos, and we actually got sunburnt! I hadn’t thought to pack suncreme but should have done. The Tennyson Trail was wonderful, and felt exactly like some of my very favourite parts of Dorset. The land rose and fell like the curves of the reclining Goddess in the Landscape. Our ancestors had marked the land with a series of tumuli, and apparently ancient burial urns have been excavated from some of these. We both felt phentermine generic vs brand very in harmony with the ancestors whilst up on the ridgeway, empathising with their choice of location. Who could not feel uplifted when standing on the spine of the island, the salt wind in your hair and the sun warming your face, gazing at the white cliffs and turquoise seas?

The next day we walked to the Longstone at Mottistone, and it was good to enjoy this alone without hordes of other people disturbing our appreciation. I expect it’s a different matter in the summer. The monolith is enormous and the area around it unsullied, despite the fact that local pagans apparently use it for ritual. After the previous weekend’s visit to the carved labyrinths at Rocky Valley near Tintagel (see my last blog) and our distaste for the awful mess left all over the sacred site, it was good to see that here, people had left no trace of themselves behind. Not even one empty tealight! We spent some time at this standing stone, simply enjoying the peace and energy of the place.

Mr B was especially keen to visit Alum Bay, where he’d been as a little boy with his family, apparently collecting the different coloured sands in a glass tube. Again the place was deserted, and beautiful. I won’t launch into a diatribe about the hideousness of the chair-lift machinery, the red and yellow notices with a list of about ten No’s on them (as in No Taking Sand, No Climbing Rocks, No …) No, I’m becoming a grumpy old woman in my old age I think! If you ignored the rusty gantry, jarring signs and twisted metal, all the nasty additions made by unthinking humans, Alum Bay was stunning. We had a weird thought about Mr B there as a little boy, running about and not noticing the shadowy older couple in warm winter clothes, incongruous on a sunny summer’s day. This had shades of the Time Traveller’s Wife for me and made me shiver. Imagine if you could see yourself in the future at a certain place, but of course never realised the older person was you?

We had the most wonderful birthday weekend on the Isle of Wight. We bought guide books, cycle trail maps, walking routes – all in anticipation of return visits. I can’t wait to go back and explore this magical place further.