Imbolc – a Celtic festival of awakening

Daffodil with a snow hood – courtesy of Mary of Mullion 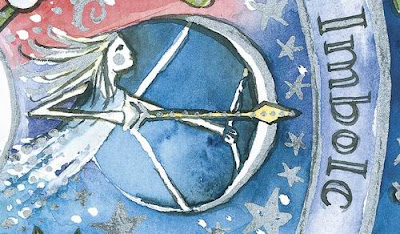 The Stonewylde image for Imbolc – the Maiden Huntress
Copyright Helixtree 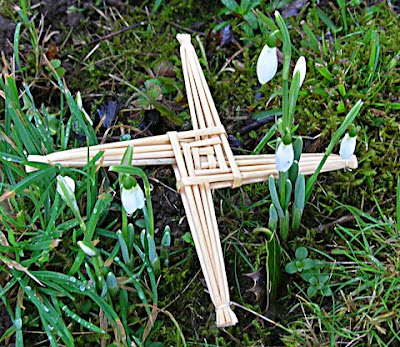 Brigid’s Cross in the snowdrops
Courtesy of Cornmother
Today is Imbolc, a Celtic cross-quarter festival later subsumed by the Christian Church into Candlemas, or the Purification of the Virgin Mary. It is the time of the Maiden, the awakening of the Earth in her rebirth after the darkness of winter. The ancient symbols for this festival, so important in an agricultural society where farming was survival (as it still is today, although we seem to forget that) are many. White candles, a girl dressed in white, young goddesses such as Bride, also known as Brigid, Brighid and later St Bridget, the maiden huntress with her bow of the waxing crescent moon, a besom (old fashioned broom) for sweeping out the debris of winter and heralding the start of the growing season … this is a time of new beginnings, a chance to declutter and start afresh.

This is also the time when the ploughing would begin, and the corndollies woven at Lammas, containing the Corn Spirit, would be ploughed back into the cold earth. Thus would the spirit be returned to the land to work her magic yet again. There are clear parallels here with Greek mythology – Demeter and Persephone – and the idea of why life returns after the barreness of winter. The St Brigid’s Cross is a symbol of Imbolc too, and the festival is featured in the fourth book of the Stonewylde series, Shadows at Stonewylde. However as this book is still in manuscript form, I’m afraid you’ll have to wait to read that!

I woke this morning to find the land sparkling with a light dusting of snow in the brilliant sunshine. Some years, Imbolc is dreary and grey, but today felt wonderful as if the Earth is stretching and yawning from her slumber. This is certainly a time of new beginnings for me. On Wednesday (two days’ time) I shall be travelling to Mayfair in London to sign with a major literary agency. This has been a difficult decision to make, as up until now Stonewylde has been my own baby, nurtured and raised by me alone (well, Mr B too of course) and to hand it over to strangers will be hard. I’ve spent the last four and a half years since I published Magus of Stonewylde promoting the books endlessly, fighting to get them into shops, trying every means I could think of to get publicity and recognition. It’s been a challenge, and finally I feel the time has come to hand this over to someone bigger.

Self-publishing is almost a dirty word in the publishing world. Authors, agents, reviewers and publishing houses seem to mock anyone who’s done it alone, the received wisdom being that if the book was any good, it would have been published by a reputable company. If the author has had to pay to print it themselves, it must be rubbish. I can’t say I’ve read many self-published books, but apparently a lot of them are rubbish because they’ve lacked professional editing. And perhaps too because the author should have stuck to their day job!

However Stonewylde was professionally edited. Thanks again to Clare Pearson, who painstakingly went through the first three books sentence by sentence and battled with me over every disputed comma and cliche! I didn’t give up my day job of teaching for a long time, and it wasn’t until the e-mails and letters started pouring in from unknown readers and the books began to sell in significant quantities that I finally believed that maybe I could write, and maybe the series would be a success. Stonewylde is not everyone’s cup of tea of course, and it’s not clever literary fiction. As I’ve said before, I really imagined it was for the young adult market, given the ages of Yul and Sylvie, and it’s been a complete revelation to discover that the majority of Stonewylde’s readership is adult, and as many men as women.

What has finally can i order phentermine prompted me to sell the rights to Stonewylde is the fact that promoting the books is a full time job in itself and I can no longer cope. Last year I travelled all over the country and twice to the Netherlands, and I spend a huge amount of time on PR and marketing. I realised in the autumn that I simply couldn’t do this and continue to write as well. If I wanted to write more (and I desperately do – not just Stonewylde but other things too that are growing inside me and starting to become insistent that they see the light of day) then I would have to hand Stonewylde over to a publisher.

However, in today’s publishing world it’s almost impossible for an author of fiction to be accepted by a publisher without a literary agent. And of course I’m up against a tricky thing here – Stonewylde has already been published and has sold many thousands of copies of each book. There are precedents for publishers taking on previously self-published material, but not many. And not for a series of three books either. Publishers need to be convinced that there is a huge market for Stonewylde. People who haven’t actually read Stonewylde often dismiss the series as a niche genre – appealing to lovers of fantasy, or whacky pagans, or only teenage girls. Anyone who’s read the books knows that this simply isn’t true. The books seem to have a very wide and strange appeal, striking a chord in the most unlikely heart.

But in line with my own whackiness and belief in a power greater than mine, I posted copies of Magus of Stonewylde to several literary agents as the Owl Moon was rising. This is the full moon of November for those who haven’t yet familiarised themselves with the landscape of Stonewylde. It’s very difficult to be taken on by a literary agent – they’re inundated with manuscripts from wannabe authors and we’re also in a recession at the moment. They receive literally thousands of manuscripts each year, and most will only take on a small handful or less of new authors. But within a week I’d heard back from two very well-known agencies, both excited by Stonewylde and keen to represent me. I can’t tell you how delighted I was!

By the next full moon, the Frost Moon of December, I’d met them both and entered discussions. I spent that moon on the Darkness and Transformation course at Scumacher (see earlier blog from December) and sat under an ancient yew tree with the full moon glowing through the branches, thinking of what each literary agent had to offer and which I should choose. I felt so lucky to even have a choice.

Now, as Imbolc is upon us, I’m about to sign with the agent I’ve chosen. This truly is a time of new beginnings for me, and hopefully before many more full moons have risen, my new agent will have sold some of the rights up for grabs. Given that Stonewylde has a huge following, with over a thousand people subscribed to my newsletter and more than five hundred members on my forum, not to mention the thousands of other readers who have enjoyed the books and are quietly waiting for the fourth one to be published, I have a real duty not to sell out. My agent and I will work closely to secure the best deals for Stonewylde, and if I’m not completely happy with what’s on offer I shall simply continue to self-publish. The last thing I would do is betray my loyal readers with a bad deal that results in Shadows at Stonewylde remaining in the darkness for much longer.

Bright blessings for Imbolc! If you haven’t yet seen my latest newsletter, sent out just after the Wolf Moon of January and containing full details of all events booked for this year, please follow this link. I’ll keep you all posted of events, and please think of me on Wednesday morning as I sign the contract.