Harvest Moon at Monkton Wyld – magic in the air 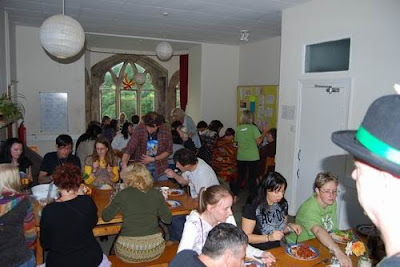 First meal in the dining room at Monkton Wyld 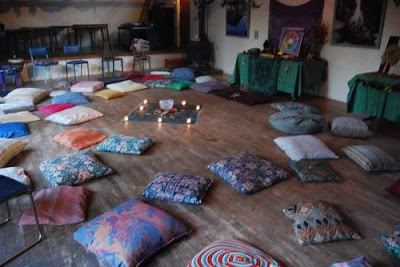 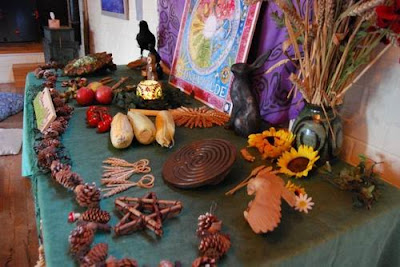 The Stonewylde Harvest altar – all the things that makes Stonewylde special 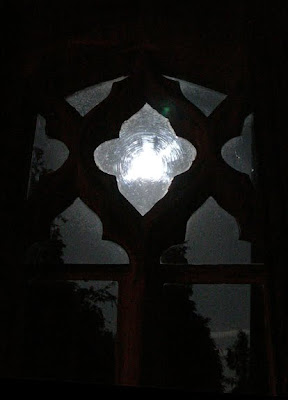 Harvest Moon through glass – courtesy of Cornmother
Fifty strangers descending on a Victorian Gothic mansion for a full moon celebration – as I’ve said before, sounds like a recipe for disaster or the plot of a dodgy horror film. Yet last weekend was one of the best in my life, and I think that many of the people there felt the same. The first Stonewylde Gathering had been so very long in the planning, and had such high hopes pinned on it. I must admit that although I was really looking forward to meeting all these lovely people who were members of my forum and such ardent Stonewylde fans, I was really very worried that the weekend would be a disappointment to them, or maybe even a total disaster. It wasn’t!

We arrived early, wishing the rain would clear, and got everything ready. Everyone had a little wooden pendant name-tag and a goody bag with a limited edition T-shirt inside, as well as some lovely gifts provided by Stonewylders. Cars started to roll in to the drive. Suddenly all those avatars on the forum became real people, many of them very nervous, several of them being extremely brave travelling alone to meet a bunch of strangers off the Internet. But they felt like old friends and were all soon either gathered in the kitchen chatting away, or unpacking their bags in their dorms and generally behaving like it was the first term back at Hogwarts. As somebody remarked – all they needed was the Sorting Hat to complete the picture.

After supper we met up in the Pine Hall for our first get-together, a welcome and an introduction to the weekend. Looking at the sea of expectant and slightly apprehensive faces, I felt as if I was back in class again addressing my new darlings for the start of term. We’d prepared a Stonewylde altar which remained in place all weekend, and on this were all the things that make Stonewylde what it is: a labyrinth, a crow, hares, barn owls, the Green Man, a pentacle and more. There was also a lovely seasonal Harvest collection: apples, corncobs, hazlenuts, conkers, tomatoes and wheat. It was beautiful, and as a backdrop was the great Stonewylde Wheel of the Year with all the symbols of the festivals.

Everyone nervously introduced themselves around the circle, most people pretty shy and unforthcoming despite their Internet chattiness. My son Olly had come along to generally help out with heavy things, and was also the official photographer. He’s been very wary of coming – his now famous line being “You’re not going to do any of that weird pagan stuff are you, Mum?” Poor Olly – he’ll never be the same again. Although an early reader of the books (in manuscript form) he had no idea of the loyalty and enthusiasm of the Stonewylde readers, and it could be said that those present at the Gathering represented the hard core. I think Olly was bowled over by not only everyone’s madness for Stonewylde, but also their sense of fun and friendliness. And that was probably the key to the weekend online pharmacy to buy phentermine being the roaring success that it was. Nobody moaned or whinged, everyone was really friendly and chatted to whoever they found themselves next to, and we all found it hard to believe that we were actually there and having such a wonderful time. The goodwill and positive energy was quite overpowering.

After the welcome, we went outside onto the lawns to celebrate the Harvest Full Moon. Sorcha and Rose from the forum had very kindly organised this, with some assistance from Ebany and Sujee. As many Stonewylde readers aren’t pagan, this was of course entirely voluntary. The celebration was very gentle and light, although beautiful and moving too, so that even people who would never normally stand outside in the darkness under a full moon, chanting, holding hands and partaking of the fruits of the earth, felt entirely at ease. It was a ceremony for honouring the beauty of the moon, a time of thanksgiving for the bounty of the Earth’s Harvest, and an opportunity to commune with nature in a beautiful setting. It was very powerful in its simplicity.

A large crystal bowl of Monkton Wyld well-water sat in the centre of the circle and a Harvest Tree stood outside. Onto this folk hung their little messages – pieces of coloured paper on which they’d written thanks for some sort of harvest from the year. We took part in a lovely guided visualisation written by Sorcha, starting on the Village Green of Stonewylde and going into the woods. It was strange for me to hear somebody else leading people around the landscape of Stonewylde, and at one point I opened my eyes. It was a bizarre sight – a huge circle of people standing under the brilliant full moon, all lost in their dreams of Stonewylde. The hairs on my arms stood on end. I felt a deep welling of emotion that all the people there had entered my world, my creation. I was to experience this several times throughout the weekend and whatever happens to me and my books in the future, that feeling of joy and gratitude to my readers will never leave me.

We all sipped cider and ate a lovely poppy seed cake, baked by Rose. She’d also written one of her beautiful Full Moon Blessings for the occasion. I’m sure that some people expected weird effects afterwards but the crucial ingredients were missing – anyone who’s read my books will know what I’m on about here!! And afterwards we hugged each other and wished everyone Bright Blessings, and Nik built the campfire into a roaring blaze. Many sat up around the fire singing for hours, but I was exhausted and Mr B took me off to bed.

I fell asleep with the bright silver light washing over me, and was bathed in Moon Magic all night. So far so good, I thought as I drifted off to sleep, smiling at the sound of footsteps and giggling down the corridor. The rain that had fallen intermittently all day had vanished as the moon rose and the night was clear and perfect. A great omen for the rest of our magical weekend.