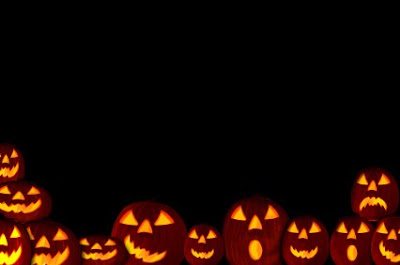 After my grumpy old woman post of Friday, I’ve been thinking a lot about this. I know that some of my forum members and friends do Trick or Treating with their children (and I’ve just noticed a new comment on the last post to this effect too) and one year when my sons were small, we did it too, much in the way of the “if you can’t beat ’em, join ’em” line of thinking. As I said before, it’s not the dressing up or mischief I really object to, it’s more the whole commercial aspect of it I dislike. And having my door knocked on by strangers and being made to feel obliged to cough up. I dislike carol singers for much the same reason – maybe I’m just mean!

I was also a bit concerned after posting that I might have offended some of my American and Canadian readers, because what I said did sound rather anti towards them. I haven’t had any “angry from Connecticut” type e-mails, but I would like to stress that it’s not American customs that I dislike, more the way we’ve adopted the runaway commercialism towards this festival that I saw in shops in the USA during my August trip. I really was shocked at the sheer volume of merchandise available, and also how very big the whole thing is not just to children, as it is in the UK, but to adults too. Their homes must be decorated to the hilt if the goods I saw are bought by shoppers. And then it’s all got to come down for Christmas and all the tat that goes with that. Is it the same for Diwali and Hannukah I wonder?

This has led me to think hard about why we do it at all. Anyone who’s read Stonewylde will know that life there revolves around the eight pagan festivals. Everything is geared towards celebrating the current festival and then preparing for the next one. Eight festivals a year mean that there’s only ever a gap of six or seven weeks between each celebration. The standing stones in the Stone Circle are painted elaborately just before each festival with new emblems. The Great Barn is decorated, as is the Village Green for some festivals, and of course the Hall and the Villagers’ cottages. All the folk of Stonewylde dress up for the festivals in their robes, tunics and head-dresses too. And I got to thinking – why am I objecting so much to what we’re doing in the Outside World when I love what they do at Stonewylde?

It made me realise that perhaps there is a human need to celebrate. Every religion, even the most uncommercial ones such as Buddhism, celebrates festivals and marks the occasion with special food and drink, decorations and costumes. In the Western World where perhaps a loose type of Christianity is the dominant religion (or so I believe but I may be corrected on this of course!) there’s Valentine’s Day, Easter, Harvest Festival, Hallowe’en and the biggest one of all, Christmas. We also celebrate Rites of Passage such as birthdays, weddings, anniversaries, baptisms, etc. Is there a human need to do this I wonder? Do we need milestones and calendar events in our lives and our journey cheap phentermine online pharmacy through the year? And is this a throw-back to what’s celebrated at Stonewylde and other ancient cultures when festivals were a way of navigating through the year, long before people had paper calendars and diaries to mark the changing seasons?

So … maybe by decorating our homes with stuff at Hallowe’en and Christmas, sending greetings cards for every occasion, buying vast amounts of chocolate at Easter and all the other things we do is merely a throw-back from ancient times when we needed to map our lives to some kind of plan, and perhaps bring some joy into the drabness of survival by doing exciting things like dressing in special outfits and performing strange rituals. In which case the whole Trick or Treating thing could be seen in a different light.

Incidentally I’d love to know where and how this custom originated. And the name too. I can’t help but think it comes from the USA, but I don’t know. I do know that when the Pilgrim Fathers and then the whole influx of settlers from the UK, Eire and Europe reached the shores of America and Canada, they brought with them all their customs, some of which remained but were not kept in the motherland. For instance, I was fascinated to learn that although in the UK we call the season between summer and winter “autumn”, in those times we called it “fall”. In the UK this changed over time to “autumn”, but the custom of calling it “fall” remained in America. I’ve heard of other things (which escape me now) that went the same way. I wonder if the idea of knocking on peoples’ doors and threatening mischief if the householder didn’t provide a treat is perhaps an old UK custom. If so, how strange that it went out of practice here, only to be revived today. It’s certainly recent here because I know it wasn’t about when I was a child. If anyone knows anything about this, I’d love to hear.

Anyway, I hope I’ve clarified my previous post now. It really is the blatant consumerism and commercialism I object to so strongly. That and having my privacy invaded by people I don’t know knocking on my door. This morning I was disturbed by two Jehovah’s Witnesses trying to engage me in conversation and give me a pamphlet. Poor things – they were sent away with a flea in their ears, as you can imagine! What on earth gives them the right to disturb my peaceful Sunday morning, force me to be quite rude in order to get rid of them, and try in the first place to convert me to their awful religion? Can you imagine the uproar there’d be if for instance Muslims knocked on peoples’ doors on a regular basis and tried to convert everyone to Islam? Or perhaps even more shocking, a group of witches!! There’d be complete outrage I guess. So how come it’s accepted by most as almost inevitable that at some point you’ll be door-stepped by Watchtower-brandishing cultists in their best clothes trying to pretend they just want a friendly chat? Mmnn – food for another post maybe about the whole issue of trying to convert people to your religion!