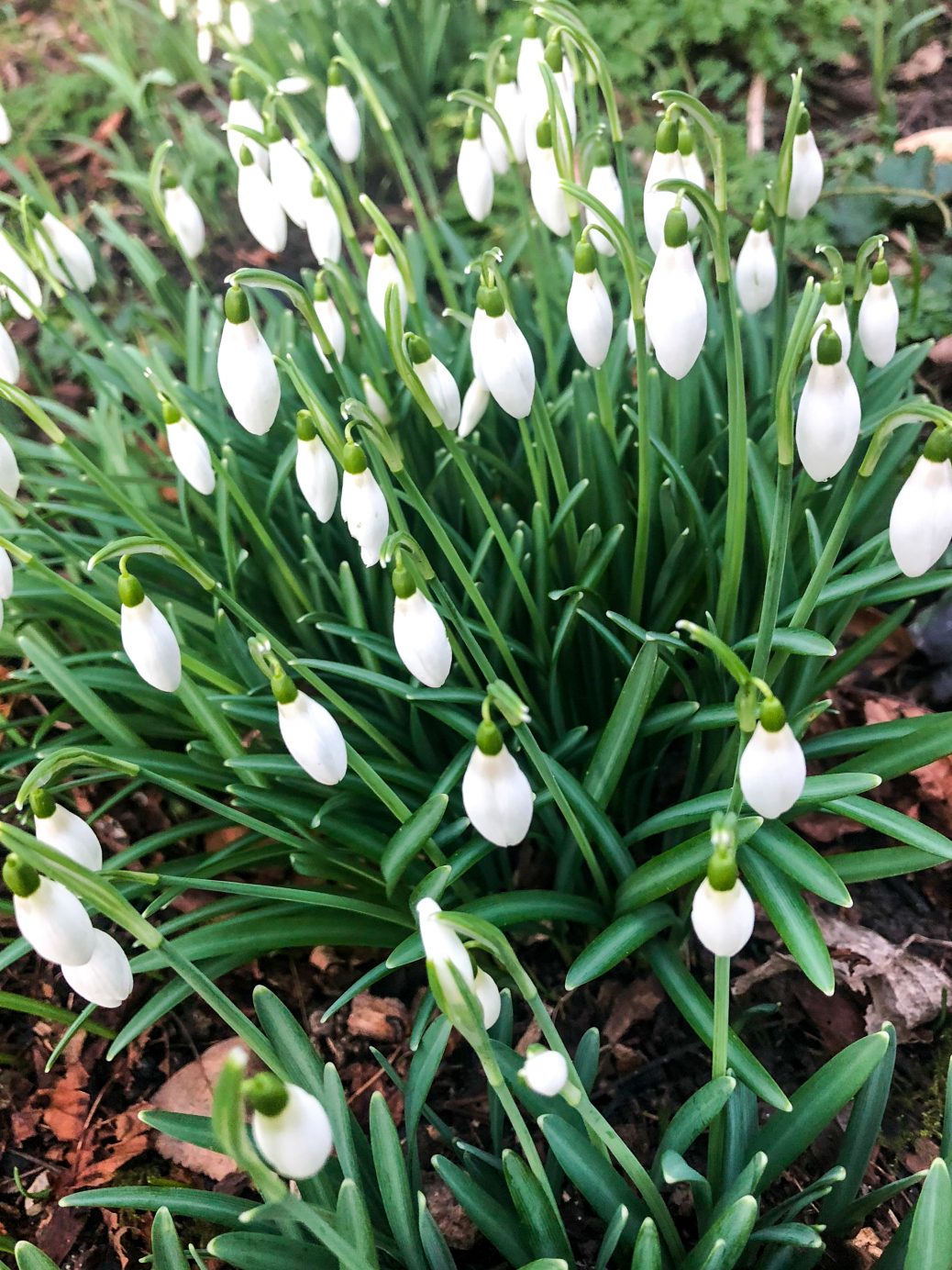 Today, February 2nd, is Imbolc on the old Wheel of the Year.  Stonewylde readers and others who follow the path will be familiar with the concept of this festival, one of the eight that marked the old farming calendar and the solar positions.

Imbolc is a time of casting away the darkness of winter and embracing the return of the light, the new green shoots of life appearing in the cold soil.  It’s a time of renewal and promise, symbolised by a young maiden. In my garden the snowdrops are blooming and all the trees are in bud, waiting for spring and warmth.  The bluetits are checking out the nest boxes and everywhere, there’s a sense of life returning after the darkness of winter.

I recently found a piece of writing I’d done back in December 2016, when I attended a wonderful course at the Schumacher College near Totnes in Devon.  The course was entitled ‘Embracing the Darkness’, and was primarily a creative course focussing on how we need to recognise darkness as a force of creativity, and not simply see it as a negative, absence of light.

Some of you may recall that I’ve been very ill, and at this point in 2016, I hadn’t yet had a diagnosis.  I’d almost cancelled the course as I really wasn’t well enough to go; I was suffering from severe fatigue and brain fog, the most awful dizziness and vertigo, and felt so very weak and ill.  But I really wanted to go, so I pushed through it and participated as best I could. One night, we went into the beautiful woodlands surrounding the college, separated and sat alone for a long time in silent meditation, watching the full moon.  The next day we wrote about our experience.

When I found this piece of writing, over a year on, I read it and burst into tears.  I realised how much I’d been trying to accept the inevitability of my death.  And reading this now, with my health fully restored thanks to a wonderful friend who suggested what may be wrong with me, I thank all the powers that be for my health.  As Joni Mitchell said, ‘You don’t know what you’ve got till it’s gone’.

So this Imbolc, I’m celebrating a renewal of my life force and creativity.  I’m working hard on writing the screenplay for Magus of Stonewylde, and bursting with ideas for other projects, including my historical book set on Portland, which I’m desperate to start writing. I’d like to share with you the piece of writing I did in my darkest hour.  And for anyone reading this who’s feeling hopeless – please, if you can, go outside and feel the return of life all around.  Embrace the return of light, and don’t give up!

The darkness outside called to me, beckoning me into the woods, into the night, into the soft, silver blanket of moonlit enchantment.  I capitulated readily enough, happy to put aside all my recent aches and pains, all my fears, cares and worries.  An adventure into the magical night was exactly what I needed right now.  So I walked with careful steps out of the bright, warm house and into the coolness of the night, where everything was changed.  Light to dark; as my eyes adjusted, I made my way along the unfamiliar path, up, away, deep into the woods beyond.

Feathery boughs of fir sprung black against the grey sky, for it was not deep night after all.  The full moon revealed herself tantalizingly through the drifting smoke of clouds.  She sailed high, one minute blazing down through the dark lace of bare branches, the next hiding coyly behind her veil of cloud.  As I stumbled on, picking my way deeper into the woods, the trees and bushes crowding around me, a feeling began to bloom.  I was not alone.  Something else, something other was here too, walking with me.

Who knows me?  Who are you?  Where are you? I could see nothing, yet my senses were jangling, and as I glanced around, searching, the feeling engulfed me.  I was most definitely not alone in this beautiful, moonlit night.  But I continued, for still the darkness was calling me, the unknown mission yet to be fulfilled.  I sensed a deeper purpose, and tried to relinquish control and rational thought in an act of faith. I wasn’t scared. Something amazing was going to happen and I must let it happen, not fight it.

My footsteps were silent on the musty carpet of fallen leaves as I followed the path deeper still, through the patches of brilliant white moonlight that chequered my way. I walked tentatively, but determined to be brave, and ultimately to face whatever it was that seemed to walk beside me. My ears were sharp, listening for it, but there was only silence around me.  Silence save for the rooks, calling from their night-roost in the silver, shifting darkness.

And then the voice came again, dark and resonant, from deep within.

I heard it clearly now and something moved inside me; I seemed to recognise that voice from long, long ago – but where? Tired now and more than a little confused, I decided to sit and rest.  I turned from the path and before me was an arch of boughs; I walked through as if entering a portal into a new, moonlit, luminous space.  I found a spot to sit on a mat of soft leaves, my back resting against the lumpy bark of a huge pine tree.  Moonlight glinted off ivy and bramble on the forest floor as I sat in silence, gazing up at the glorious face of the moon.  She peered from beyond the veil, her silver magic bathing my skin, drenching me in her light and eternity.

I sat for some time in peace, quietening my thudding heart, my head against the unforgiving tree-trunk, hands loose in my lap, eyelids drooping from the bright flood of moonlight.  Then my nostrils began to quiver. What was this?

And the sharp, sweet smell of wood-smoke came to me … for real?  In memory? The keen fragrance of burning wood lingered, aromatic and beautiful in my lungs. And then I could taste it too, that feeling; familiar, warm, slightly spicy.

And now, at last, I began to feel the calm of acceptance.  I breathed deeply, slowly, grounding myself in the woodland, on this little piece of the planet, in the lap of Mother Earth.  I felt at peace, my heart and soul soothed and held safe as finally, the truth began to dawn.  The bright moon, haloed blue and gold against the drifting clouds, blazed down in glorious indifference as finally, I started to understand.

I experienced again that connection, rooted, tranquil and ready now to obey the summons of that which had called me out into the night, into the silvery, enchanted woods.

I watched, detached, as my feet and legs spread out before me seemed to dissolve into the silver undergrowth; as my hands lost sensation; as the rough bark behind me ceased to press into my skull. My heartbeat slowed … faltered. Vision began to blur.

And True Dark reached out to embrace me.