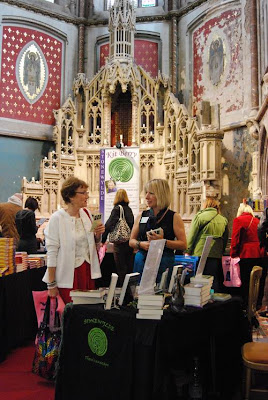 Kit chats to a visitor at Gorton Monastery – note the Stonewylde banner near the old altar! 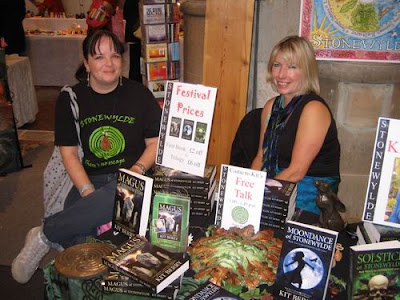 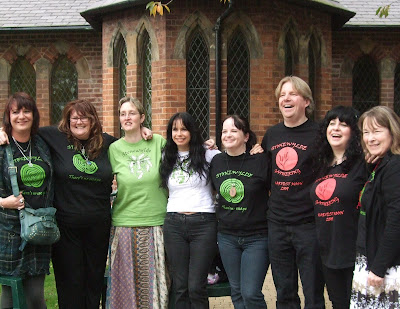 I did it! After all that worry about not being well enough to make it to the Mind/Body/Spirit event last weekend in Manchester, and with Mr B still trying to dissuade me, we left Reading on Friday and drove all the way up north. I still wasn’t feeling right after the horrible virus that got me immediately after Olympia and had kept me in bed for ten days. But I was determined to do this show. It was to be my last visit up north this year and maybe for some time, and I knew that many of my lovely fans were planning to come.

We arrived nice and early (for once!) and found that the Magik Thread Bookstall had the most brilliant pitch – the entire chancel, which is the large elevated area between the altar and the nave. We looked down on the whole of the beautiful monastery (deconsecrated I believe) which was buzzing with MBS stalls. Crystals twinkled, incense wafted and spiritual music filled our ears – but the monks wouldn’t have recognised it!

Mr B and I set up our Stonewylde table, with the now familiar Green Man, the labyrinth, the hare and of course our big poster of the Wheel of the Year. But where to put the new Stonewylde banner? Lee of the Magik Thread hopped over the altar rail and positioned it right in front of the altar! It was so visible – and then Mr B put our dear old crow up on top. I really wasn’t sure about all this, and looking up, saw a giant effigy suspended overhead and hanging by a chain. I had superstitious visions of the whole crucifix falling on top of me and smiting me dead for being so cheeky as to put my banner in the place of honour. I think I spent far too many teenage hours singing in the church choir not to feel a little uneasy at this apparent sacrilege!

We had the most amazing day. As soon as the doors opened the first Stonewylde fan arrived, and from then on it was non-stop. Many had come dressed in their T-shirts, and others bought new Green Labyrinth ones from us, then dashed off to the loo to put them on! The photo above shows some of the fans who’d come along displaying the four different Stonewylde T-shirts. What a lovely bunch – and they weren’t all in this generic phentermine brands photo either!

I had been worried about giving my talk because I was still feeling a bit odd and was scared of coming over all faint. As I was sitting fretting about this, a lovely lady called Pat who organises the Health and Healing Festivals at York and Leeds offered to help. She spent about fifteen minutes giving me some healing and then helping me to balance my chakras. Afterwards I felt so much better – calmer and focussed, with the panic feelings gone. Thanks, Pat – you were wonderful!

I was told that my talk was fully booked very early on, with people being turned away. So many people packed into a room, with ones who’d sneaked in standing at the back. I had hoped that maybe only a few readers would turn up and we could just sit and have an informal chat. Fat chance! There were no Stonewylders at my talk and only one person there had read Magus of Stonewylde. The whole audience apart from her had come because they were so interested in the concept of reconnecting with nature. It seems this subject really resonates with people, and I ended up enjoying giving the talk very much.

One lady told me that she’d been feeling very dissatisfied with her life of late, and saw the flier advertising my talk. She felt this was what she needed – this was the change that she should make to her life. She loved my talk and said she would definitely be focussing on living closer to the earth in future, difficult though it is for people living in cities and working long hours. She also bought the set of Stonewylde books and so did many others! It’s lovely because immediately after every event I do, there’s always a flurry of extra activity on the forum as new members join us, and also a sharp increase in hits to the website and subcribers to the newsletter.

Mr B and I stayed on until the very end, especially as we were only at the MBS fair for one day. One of our promo-pixies kindly took over the Stonewylde stall so we could have a break, and the rest of them hung about helpfully just in case. We’re very lucky to have such support; many thanks to all the fans who turned out on Saturday, to Angie for organising such a brilliant event, and to Lee and Peter of the Magik Thread for hosting us for the last time this year.

Next event: The Big Green Bookshop in London at 7pm on Friday November 6th – an evening of Stonewylde magic. See the News and Events page of the main website.