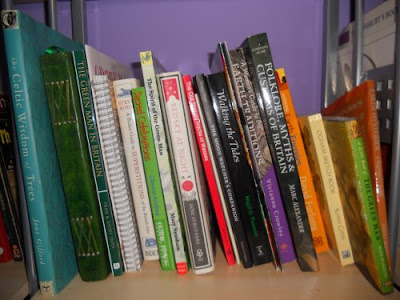 I’m back – I couldn’t write a post yesterday as this damn virus still has me in its coils. I think I’m on the mend, get up and start trying to behave in a normal fashion and WHAM! I feel awful and have to take to my bed again. Such was yesterday, and today too. The sun is shining outside and it’s beautiful – I long to be walking in the woods and fields and feeling right, but instead I’m stuck in bed feeling dizzy and weird. You know when you get the dreaded spinny-thing on your computer? That’s what my head feels like at the moment – permanently in spinny-thing mode. Not responding.

Anyway, enough moaning. Thanks for the comments again. Martyn – that’s an interesting proposition. Unlikely that enough people would be interested in my planning notes to make them worth publishing, but perhaps one day I could give a talk to any interested Stonewylders. And yes, Simone – I certainly think it’s really important to do plenty of research and get your facts right. If people are going to suspend disbelief and invest their time reading your novel, the least you can do as a writer is try your very best to make everything as accurate as possible. And even then you make mistakes sometimes! The second picture above shows a few of my reference books on folklore, traditions and superstitions. I do try to get things as accurate as I can, and if I invent something at Stonewylde, I try to ensure it’s feasible within existing customs. And Laoi – I do hope this blogging about how I’m creating the book doesn’t spoil the magic for you! Please remember that Stonewylde is actually real.

The first picture above is of Robert McKee (courtesy of his website), the guy who put me straight about the principles of planning a novel. I found he’d written a book called ‘Story’ all about structuring a screenplay, but which was also applicable to any story-writing – stage, book or screen. I’d really recommend this book to anyone setting out to write; I learned so much from it. He makes reference to other works I’ve read in the past: Aristotle’s ‘Poetics’ and Joseph Campbell’s ‘Hero with a Thousand Faces’ for example, both of which are well worth a close read.

When the hefty book arrived, I devoured it. Suddenly all the things I’d sort of half-worked out fell into place, along with many other things that had never occurred to me. When you’re writing a story, it’s so easy to become totally immersed in the plot and characters – you forget about the actual structure and how it all works behind the scenes. I won’t try to precis Robert McKee’s work here because I’d never do it justice and it’s far to complex for that. But his insights into Inciting Incidents, the Law of Conflict, Crisis, Climax and Resolution, how to deal with exposition – all were fascinating and so very helpful. After reading the book, I also attended one of his four day Story Seminars which he holds all over the world; luckily one came to London at the right time.

It was expensive but incredibly intense and professional. It more or less followed the contents of the book, but hearing the theories expounded by Robert McKee himself really brought them home. I came back determined to apply everything I’d learned, and promptly re-edited the first three Stonewylde books and practically rewrote the existing draft of the fourth book. And now I’m starting from scratch with the fifth book and it’s great having a little more knowledge about structure this time around. I realise I probably should have re-read Story before starting on book 5, but much of it has stuck in my head I hope.

So now it’s back to the second chapter for me – into the Stone Circle and the celebration going on there. I was on a little bit of a roll last night and need to see if what I wrote in the small hours was any good. I’m disappointed that I’ve achieved so little this week, but hopefully next week will be better. I hope you all have a good weekend!