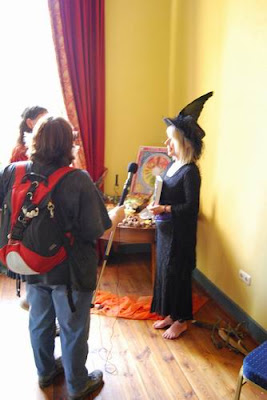 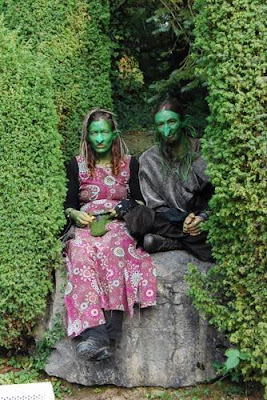 Two of the Green Goblins – waiting to pounce on litter droppers! 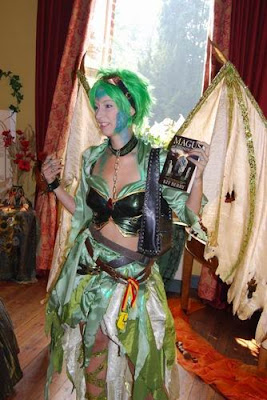 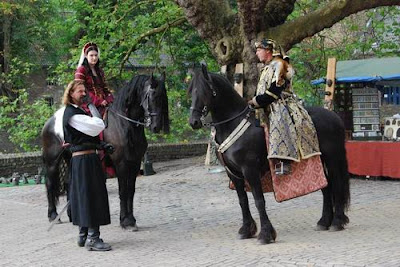 Some wonderful medieaval characters outside the castle near the moat
There was a great song in the eighties by Talking Heads, and one of the lines was, “And you may ask yourself – how did I get here?” That’s a feeling I’ve had a lot since Stonewylde took over my life. I felt that sense of unreality in Port Eliot in the summer, as I sat on an elegant sofa next to the Earl of St Germans stroking his whippet, drinking wine and balancing a wreath of ivy on my head. I felt it earlier this month as I stood before fifty odd Stonewylde fans, all of whom had travelled a long way to spend the weekend together, and read them snippets of the fourth book Shadows at Stonewylde. And I felt it with a vengeance at the Elf Fantasy Fair, and most particularly on the Sunday morning there. I was honoured to be invited to join the King of the Elves and his entourage on the balcony above the castle, as he addressed the hordes below to officially open the castle to the public. I stood in my golden Lammas Queen ballgown, a circlet of corn and poppies on my head and a massive fan of woven wheat in my hands, and surveyed the huge crowds below on the bridge over the castle moat.

The ceremony was performed with due pomp and ceremony by King Gyan I . On the balcony stood various members of the royal party, several lackeys in chain mail and tabards and two lovely ladies in full mediaeval costume with hawks on their arms. If anyone has a photo of this please do send it to me! The crowd below were a bizarre bunch – everything from faeries, Star Wars characters, vampires, goblins, mediaeval peasants, archers and highwaymen to exotic Geisha girls and impossibly shod Goths. A strange thought passed through my head – four years ago in September I’d been a school teacher, standing before a class of teenagers with a white board buy phentermine k 25 online marker in my hand. How did I get here?

Mr B and I had a truly amazing stay in the Netherlands. I don’t think we have anything like this Elf Fantasy Fair in the UK. I’m not sure but I’d imagine the Goth weekend in Whitby is perhaps the closest we get to it. What was so brilliant was the spread of costumes and the diversity of ages. I saw babies dressed up in little faerie and elf outfits, with cobwebby gauze draped over their prams to protect them from the sunshine. There were many children running about in wonderful costumes having the time of their lives (how I’d have LOVED it as a child!). But there were also some really quite elderly people all dressed up beautifully and having a fantastic time. I even saw one very old man in a wheelchair wearing a vampire costume and top hat!

There was a huge amount of interest in Stonewylde and our room in the castle was packed from opening until closing time with visitors. Stefan Struik had billed me as a VIP and on arrival I was greeted by my own face grinning out from huge banners, both in the car park and hanging from the castle walls! That was something of a shock. The talks I gave were in a beautiful room complete with a throne (which I didn’t sit on – even I have limits!). An exciting thing on the Saturday was a visit from Oliver Holzwarth, the bassist from Tarja’s band who were playing that evening as the headliners. He bought all three Stonewylde books, saying they were on tour and he needed a good read to help him relax. He also bought our new Green Labyrinth T-shirt and promised to wear it on stage that evening. And he did! We felt so proud and of course he’s on YouTube so loads of people will see our Stonewylde T-shirt.

By the time the fair closed on Sunday evening we were all absolutely shattered. But it was a really magical weekend, and I know that we’ll be doing it again. There’s another even bigger Elf Fantasy Fair every April, organised by the same people, in a castle near Amsterdam. I can’t wait!!