Drinks with the Earl of St Germans at Port Eliot 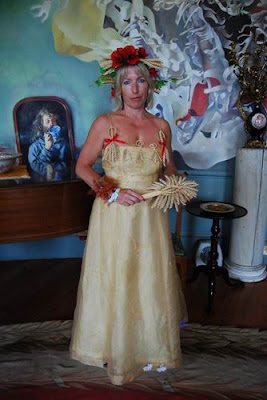 Sadly I don’t have a photo of me and Mr B having drinks with the Earl and Lady St Germans on the Friday night (it would have seemed a little crass to be snapping away at such a posh do!) but this is a photo of me in my Corn Mother of Lammas costume taken in the famous Round Room at Port Eliot. In the background you can see some of the incredible mural which graces this whole room, painted by the late and notorious Robert Lenkiewicz.

We arrived in Saltash very late on the Thursday night and stayed in a hotel. On Friday amidst showers we arrived at Port Eliot, and it was pretty chaotic there with guests, exhibitors, performers and staff all over the place. The organisation of such a huge and complicated event must be a nightmare. There was staff everywhere with walkie-talkies and fluorescent jackets, and everyone was as friendly and helpful as could be, despite the obvious stressfulness of getting everyone organised in the right place. We quickly pitched our tent in the campsite in a nice empty spot overlooking the whole sweep of parkland, and then made our way to where we’d been told to put up our Stonewylde gazebo.

Mr B and I had bought a lovely black gazebo specially for this event. We spent a while putting it up on a very steep slope, which it didn’t like very much at all not being designed for this. We had no idea if it was waterproof either, and the weather was showery. There was an air of great expectancy all around, excitement and anticipation as people started to flood in. Finally the gazebo was erected as well as we could manage, with its side panels protesting about the strong winds and its guy ropes straining. We made our way back to the camping bit to get changed for the drinks party in the great house itself.

We then discovered that the site had somewhat filled up in our absence and we were surrounded with tents full of toddlers. Noisy ones. We’re at that happy stage in life where our children are pretty grown up but with no grandchildren yet in sight – so we’re most certainly not in toddler-friendly generic phentermine canada mode at the moment. It didn’t bode well for the night ahead. But remaining resolutely positive, we changed for the posh evening ahead.

Artistes and performers had been invited to a special drinks party at the house and we’d been really looking forward to this. Mr B had spent a very happy year in St Germans as a young student back in the 70s, with Lord Eliot as he was then as landlord. Mr B had been one of the village lads called in to help build the maze in the grounds, and had happy memories of his time there. So being invited into the house as a guest, thirty years later, was something of a special event for him.

We spent a wonderful two hours sipping champagne, devouring Duchy Original canapes (I know one is meant to nibble but I was ravenous!) and talking to all sorts of interesting people. It seems to me that Port Eliot Festival is unique in its scope. It’s a literary event and yet it’s so much more than that – there are many musicians and other strange performers, and it has that wonderful alternative flavour too. Very arty and different. I just loved it.

Mr B had a long chat with the Earl, who was utterly charming. He remembered Mr B and the building of the maze, recalling incidents from that time and seeming genuinely pleased to meet up again with someone who loved Port Eliot so much and had such great memories. Later I sat down on the sofa and talked with him myself, admiring Roo his beautiful whippet. I’d heard tales of what a generous and sweet man the Earl is, and this chat with him confirmed it for me.

After the party we had the most delicious food in a huge tent belonging to a company called The Food Groove. Petra the owner, who’s also an artist, was excited at meeting us as she’d heard of Stonewylde and wanted to read the books. We arranged to meet up later over the weekend, and then, feeling exhausted and quite merry, made our way back to our tent for a good night’s sleep. Ha! Fat chance of that, and I shall tell you why tomorrow.