Climb every mountain – well, one at least! 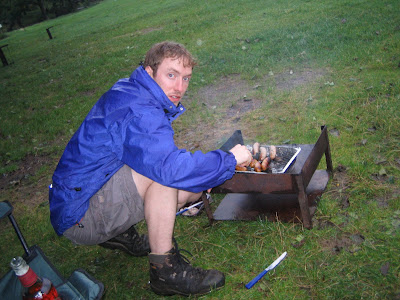 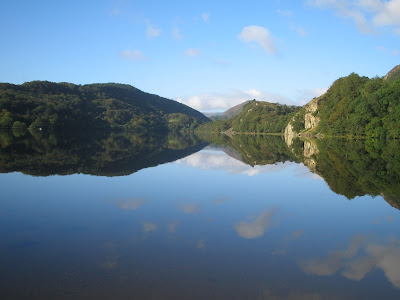 The view from the campsite – Llyn Gwynant 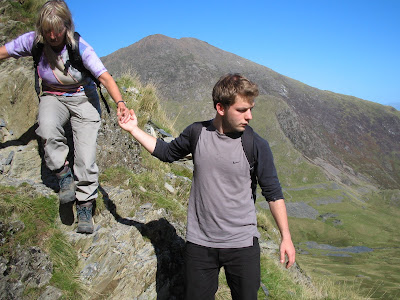 A helping hand from my youngest son 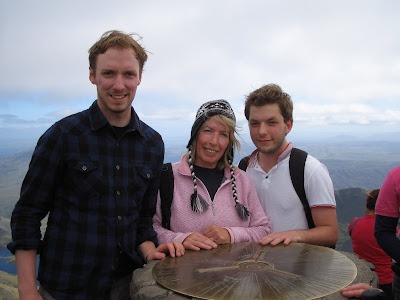 At the summit of Snowdon – a great sense of achievement
I’ve never climbed a mountain before, from the bottom to the top. Therefore although I’m dying to blog more about our Stonewylde Harvest Moon Gathering (and will do so in the next day or so as I’m absolutely buzzing with it) I’m afraid my mountain experience has to be shared first. As I’m buzzing with that too!

My sons Olly and Will and I drove to Wales on Tuesday, arriving at Llyn Gwynant in the late afternoon. It’s a beautiful campsite at the base of the mountains, right on a lake. Will had spent a fantastic few days there back in April with a group of friends. He’d convinced Olly and me that we’d love it, and we did. It was very basic and natural, with no marked pitches. I was a little alarmed by the expression on the man in the camp office’s face when he said we could camp wherever we liked if we could find a dry spot. He didn’t say this until we’d paid of course.

Much of the camp site had turned into marsh, it seemed. There were only three other tents in sight. I hadn’t taken my wellies (as ever, ill prepared for the situation) but Olly was even worse – all he had to wear were jeans. At this point the persistent drizzle upped a notch into serious rain. And then the wind began to blow, and within a few minutes the clouds had closed in, billowing down the mountains and engulfing us in cold grey wetness. We paddled about trying to find a dry spot for our tent, the rain soaking Olly’s jeans and “waterproof” jacket (Olly thinks if it’s made with a nylon feel it must be waterproof) and my trainers.

We found a slightly drier bit right near the river that fed into the lake (I tried not to think of banks bursting etc) and began to unload things from the car, which had to be parked quite a long way away and on the other side of a large flooded bit. Squelch squelch. We bravely held onto the flapping tent, shoving poles through sockets, pushing tentpegs into the soggy, yielding ground (no need whatsoever for a mallet) and trying not to get the sleeping pods wet. I’d thought to direct the proceedings but Olly took over in a very manly fashion – must have been all that hard work at the Gathering over the weekend.

At last the tent was a little wonkily erected and all the stuff brought in from the car. I felt cold and miserable and couldn’t possibly imagine sleeping that night with the gale bullying the tent in a very intimidating manner. It felt like it would take off at any moment. I wanted to go home. Or at least sleep in the car. My boys buoyed me up, making tea on the camping stove and then lighting the disposable barbeque we’d brought along. Olly sat outside in the rain cooking sausages whilst I huddled inside drinking hot tea and wrapped in a comforting blanket with Will trying to cheer me up. Strange, I thought to myself. All those years of making the best of it for them, jollying them along, supporting them ….

By the time supper was ready the wind had died completely and the rain had eased off back into an annoying drizzle again. It’s amazing how hot food and drink alter ones perspective. Will went off to find a fire basket and buy fire wood and was determined to light a cheerful fire to warm us up even further. He struggled for ages with damp wood and the falling rain, and we nearly ran out of newspaper and kindling (having not thought to bring fire-lighters of course). Poor Will was really disappointed as he’d been looking forward to making a good blaze – a primeval thing I suspect – but then we hit on the idea of using the camping stove to get the kindling to burn. That combined with Will blowing gently did the trick and we soon had a lovely fire roaring. At that point we all felt very happy to be in a tent at the bottom of a Welsh mountain.

Something weird happened with the weather during the night. Not only had the wind dropped, but all the clouds disappeared, to such an extent that the brilliant moonlight actually woke Will up. I slept very soundly, cosy and contented to hear owls calling. And the next morning we awoke at 7am to clear blue skies! After the horrendous arrival the day before, this was amazing. Bacon butties were cooked, tea brewed and walking socks pulled on. Olly was now committed to shorts as his jeans were sodden, but other than that we were quite sensible about taking lots of layers, waterproofs, hats and gloves. Will told us how in April they’d been freezing climbing up Snowdon.

A quick visit to the shower block brought a lovely sight – four fluffy swallows sitting in a row in the rafters of the building, watching me brush my teeth. They seemed perfectly tame, chatting amongst themselves, and even allowed the boys to sneak in to take a look.
“Get going to Africa!” I wanted to say to them. “Hurry or you’ll be late and will perish on the way if you linger here in Wales any longer.”

We drove to the base of Snowdon and set off on our ascent, full of high spirits as the sun shone, clouds scudded and birds sang. It was beautiful, buy phentermine china with sunlight shafting down through the woodland and the constant sound of running water in our ears. Everywhere there was water, cascading in the river, running in gullies along the side of the track, dripping over mossy stones into pools and ferns at the bottom. The track changed subtly as we tramped along, becoming stonier and then rockier as the farm land and trees were left behind.

Sheep were everywhere and we loved their tails! Why are they left on in Wales? Or rather, why are they chopped off everywhere else? The sheep looked so clean (must be all that rain) and were very noisy, full of gossip when they managed to break away from the serious business of eating grass. Gradually the terrain changed and then we were in the proper mountain base, with rocks and a much steeper gradient.

It was at this point that I began to realise the enormity of what we were doing. Up until then it hadn’t seemed real. The summit of Snowdon loomed far, far above, sulking in a bit of grey cloud. All around us were massive mountains – peaks and ridges – towering above and dwarfing us. We kept on, stopping quite regularly for bits of Galaxy. Oh yes, I’d read all about emergency rations! Various hardy souls overtook us – mostly youngsters in their late teens in groups. One man passed us smoking a cigarette! I realised that for various reasons (all very valid) I hadn’t really done much proper hard exercise since my 5Km run back in July. However, every time I congratulated myself on doing this in my fifties with no proper training, some hardy looking soul with white hair, deep wrinkles and very stringy legs would go bombing past in serious walking boots and put me to shame!

My boys were brilliant, supporting me when I flagged a bit, helping me up the tricky bits (and it really was hard work at times) and carrying most of my stuff in their bags. I recalled all the trips we’d done twenty or so years before, when I’d been the one doing all the carrying and fussing. It’s a wonderful thing when your babies grow up and start to take care of you.

We were crossing a long ridge, just before the final very challenging bit, when suddenly a large black bird flew close overhead making a strange noise. A raven! That gave the whole thing a new dimension for me. Then another raven joined him, both of them swooping and drifting around us, making their strange “cruk” cries as they circled around us.

Finally, after some strenuous proper climbing using hands and rocks, we reached the summit. I thought of the Overlook Hotel in the Shining. We climbed the steps to the bronze sundial at the highest point – apparently you have to touch this to say you’ve climbed to the top of Snowdon. It was a wonderful sense of achievement, and so very beautiful there. Words can’t describe the vast greenness and folds and folds of mountains. The sun was blazing down on us and we were in T-shirts when out of the breeze – a glorious day with brilliant blue skies.

We drank tea in the Overlook cafe, sneakily ate our packed lunches hoping we wouldn’t be chucked out, and smugly looked weary in front of the hordes who’d taken the little train to the top. All was well until the point when I tried to stand again and found my legs had given up. They’d locked solid and refused to bend in the middle like they should. I hobbled down the steps from the cafe and we began to head back, taking a different route this time.

We walked a long way along the ridge that forms part of Snowdon, all the time my knees protesting loudly that they’d really had enough. Then my toes started to join in, rubbing against my boots and feeling much bigger than usual. It was difficult to climb down the steep rocky bits. Both boys took turns in helping me, and eventually after three and a half hours of descent we were on the track leading back into the farmland and almost at the car. I was so glad to sit down, but didn’t dare take my boots off yet.

Back at the campsite, still bathed in glorious sunshine, we began to pack up. I insisted on a cup of tea before that long drive home, and was not impressed when the tent started to collapse around my ears literally. Will and Olly found this hysterical – me sitting with a mug of tea and the tent draped all over me. My sense of humour had completely vanished. I was dreading the drive back to Reading – all 237 miles of it.

Finally all was packed and stowed away in the car. I’d abandoned my boots and put on my wet trainers. We stopped in the nearest town (it had a very Welsh name which I’m afraid I can’t remember) and devoured the most delicious fish and chips ever, and then began the long trek home. We finally arrived home close to midnight. Mr B had a very deep and very hot bath waiting for me, all bubbly and candle-lit with incense burning. A perfect end to a perfect day.

I don’t know if I’ll ever climb Snowdon again, although I certainly intend to return there to share the beauty of the campsite and the whole area with Mr B. But it was a tremendous sense of achievement to have done it, and a great experience to have been looked after so well by two of my babies.