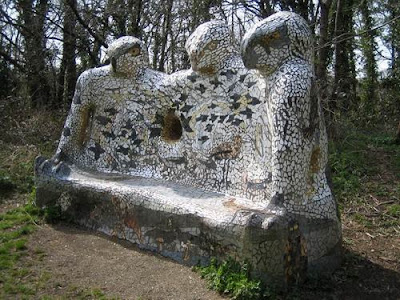 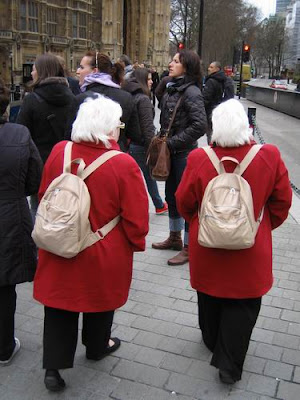 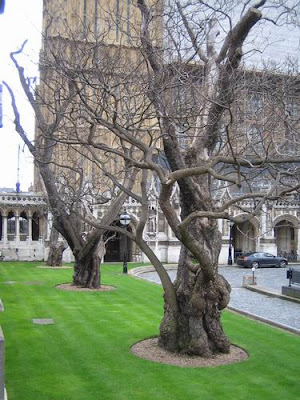 Gnarled trees outside Houses of Parliament 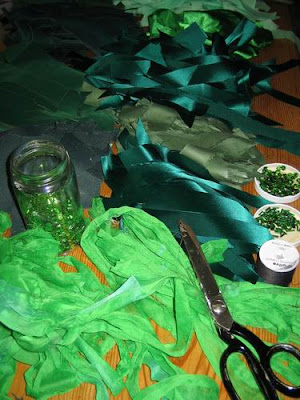 What an incredibly hectic month it’s been since my last post. Suddenly this year is almost into May already – seems only a couple of weeks ago we were snowed in and queuing for milk at the Co-op! This will only be a brief blog as I’m off to the Elf Fantasy Fair in the Netherlands in the morning. We’re leaving extra early because although we booked our ferry tickets months ago, with the ban on flights only just lifted, we heard that the ferry ports are very busy indeed with poor folk desperate to get home.

During April we had a great weekend in Devon, staying in a caravan and cycling the beautiful Tarka Trail. This is one of the many disused railway lines, decommissioned by Dr Beeching, which has now been turned into a traffic free cycle route. Last year we cycled the Camel Trail in Cornwall, and the Tarka Trail was equally wonderful. The trail was named after Tarka the Otter from “Ring of Bright Water” and along the way there are many large and surreal mosaic sculptures of animals mentioned in the book. Over the weekend we cycled 52 miles, but as most of it was pretty flat, our legs survived well.

Another weekend we enjoyed a trip to London. Although we live in Reading which is within easy reach of London, we rarely stay overnight, so this was a rare treat. I enjoyed a morning alone in the V&A museum, and was particularly taken with a little exhibition of fairy paintings. There were examples of many different ones, including Arthur Rackham, but best of all was a wall of original paintings by Beatrix Potter and Cecily Mary Barker. The V&A had matched the two ladies’ flowers – Potter’s botanical studies and Barker’s fairies. Exquisite!

We did lots of touristy things, including a visit to the Tate to see the Henry Moore purchase adipex p online exhibition. We really enjoyed that. Outside the Houses of Parliament, I was struck by the old trees (plane trees I think) which stood in a row by the drive leading underground to the car park. They were heavily gnarled and twisted like very old people, and must have witnessed so many sights, including countless Prime Ministers come and go. Another strange sight that fascinated me was a pair of elderly identical twins. Every single thing about them was exactly the same. I wondered how they chose clothes, shoes and bags. What if they disagreed? Did they eat the same food? I’ve never seen older twins quite so inseparable. They talked to each other non-stop, but I think they were Eastern European so I couldn’t tell if they spoke twin language.

I’ve also been very busy preparing for the Elf Fantasy Fair in the Netherlands. Readers may remember we attended one last September at Arcen, down in the south. This April event is at Haarzuilens further north, and usually attracts 25,000 visitors! We have our own little pavilion and I’ll be giving talks about the Green Man at Beltane. I shall be dressed as the Queen of May, wearing a beautiful dress made for me by Sam of The Goddess Equation in Newquay. My head-dress is foliate and flowery! I’ve also been lent the most gorgeous Beltane neclkace and ear-rings by Roses of “Where the Wild Roses Grow”. They’re made from real hawthorn twigs and leaves, coated in silver, and are exquisite. I’ll post photos next time.

Mr B will be going to The Elf, as locals call it, dressed as the Green Man. I’ve spent the last few weeks sewing hundreds of tatters onto a green cloak. And sequins and some leaves. It’s been a real labour of love doing this as it’s a pretty tedious job! However I’m sure he’ll look splendid. My next post (which will be much quicker coming than this one I promise!) will be all about the fair and I’ll put up some photo too.
Share this
0 likes
Related Articles
3 Comments