Big Green Bookshop – what an honour! 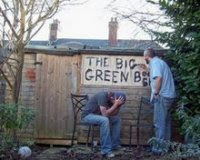 Two blokes, one bookshop, no idea … 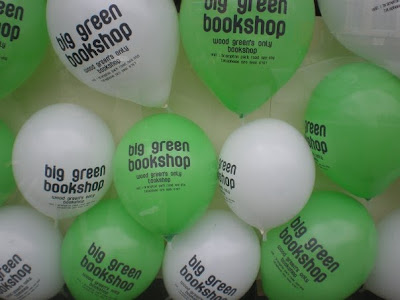 Time to celebrate – the grand opening 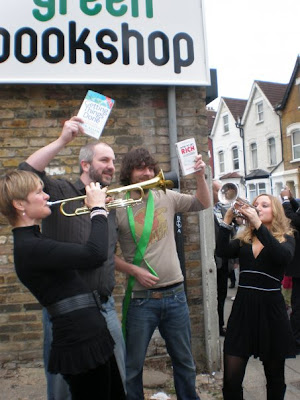 Tim West and Simon Key open the shop to a great fanfare! 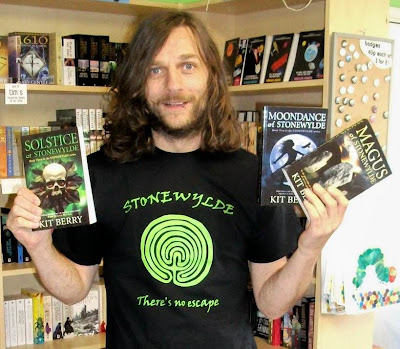 Simon Key enters the world of Stonewylde – from which there’s no escape
(All photos courtesy of the Big Green Bookshop)
This Friday 6th November I’ll be spending the evening, from 7pm, with Simon Key the celebrity bookseller in his very special shop. I’m so honoured! I was telling him tonight that I’m more nervous about this event than any of the others I’ve attended this year. I’ve spoken to huge audiences at much bigger venues (we’re limited to 40 guests at his shop so it’s going to be one of my smaller talks in that sense) but The Big Green Bookshop is so famous and important in the bookselling world that I’m in jelly-fish mode at the moment. And by that I mean quivering rather than stinging.

You may wonder why a small independent bookshop tucked away up in Wood Green, north London, is so important. It has a very interesting history, and what Simon and his partner Tim West have done is absolutely ground-breakingly brilliant. I have such respect for what these two guys have achieved, and so it seems do many others. Which is why they’re doing so well.

Simon and Tim used to work for their local Waterstone’s branch. Between them they had over 35 years of bookselling experience. It would be true to say that they were pretty dedicated to their careers in bookselling. But then, in one of their rationalisation moves, Waterstone’s decided to shut the shop. The local community organised a petition and protested vehemently at the closure of the only proper bookshop in the area – but to no avail. The branch shut, and Wood Green was without a bookshop.

But the story didn’t end there, as it’s sadly done in many other towns. Simon and Tim decided to open their own independent shop and set about it. I remember first reading about them on someone’s blog on the Internet, and immediately joined their Facebook group. They chronicled their struggles – finances, premises, legalities – until finally they were given the keys to their new shop. They’d run a competition to name it, and The Big Green Bookshop was born.

They appealed for help on Facebook. They needed labour and expertise to decorate and fit out the shop, transport and tea-makers, pairs of willing hands to muck in. They found help in abundance, people enjoying the chance to support the “little guys” for once. I wanted to help but live too far away – but I watched their progress and was so glad for them.

Just 23 days after they’d got the keys, and only 7 months buy phentermine powder since the demise of their branch of Waterstone’s, Simon and Tim were open for business. The Big Green Bookshop opened its doors and began trading, to fanfares, balloons and ribbon-cutting. The local community rallied around and showed their support, and have done so ever since. This was in March 2008, and despite the recession that’s bitten so hard since then, Simon and Tim are going strong.

They’re still proactive on Facebook, maintain a regular blog, and do a lot of Internet networking. They’re the darlings of the media and get a lot of good PR this way – because we all like to see people who’ve refused to accept defeat, stuck their necks out and taken risks. And succeeded! One of their secrets of success is the immense amount of hard work and long hours they put in. They hold events in their shop almost every week, and sometimes more than once a week. They have all sorts of authors in, and also encourage their younger customers with regular children’s events. Including a nasty ugly face competition online, where we had to vote for the ugliest child (not quite as cruel as it sounds as they were pulling the most hideous faces!). They also run four book clubs a week – so their success is certainly well deserved.

And in two days’ time, I shall be there as their guest author! After following them and admiring them for so long, I really can’t believe it. The Bookseller are sending a journalist to cover the event, and we’ve sent out a lot of invitations on Facebook. I’m really hoping for some support from my lovely Stonewylde readers too. Simon will be selling the books at a good discount, along with our greetings cards and T-shirts, and there’ll be refreshments too. I shall be talking about Stonewylde, reading extracts, answering questions and signing books. I’m very excited and was especially delighted to see the photo of Simon wearing a Stonewylde T-shirt!

I hope many of you will be able to come, and bring your friends too. It’s a free event and you don’t even have to buy anything – just be there to give me a bit of support. Even if you’ve already got Stonewylde books, you may find something else there of interest as they stock a really wide selection, and we’re not talking about rotten old supermarket books here! The bookshop’s been in the news all this week as they’ve just teamed up with Gallic Books in the first known “twinning” in the book industry ever! An independent bookshop twinned with an independent publisher – a stroke of genius. I told you they were ground-breaking, didn’t I?