A magical time in Cumbria 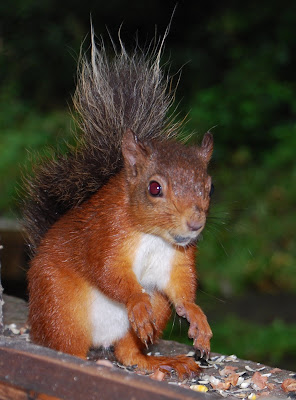 This is one of the little chaps who greeted us every morning on holiday in Cumbria. There were at least three different squirrels we identified who’d arrive (separately) on our kitchen window sill every morning to check out the breakfast menu, and who’d come back regularly throughout the day to see if we’d topped up the offering. Seeing a red squirrel so close up was absolutely wonderful – as was the whole holiday, despite the weather.

Readers of the Stonewylde newsletter will know that Mr B and I got married in December, and between us have eight children ranging from 24 down to 11. This holiday was our first together, as our two families have gradually joined into one new one with its own identity. It was brilliant!! We stayed in the most perfect old millhouse near Penrith, just outside the Lake District, which was pure Stonewylde. The walls were about 18″ of solid stone, there were massive exposed beams and woodburning stoves. The kitchen was huge, with a table that seated all ten of us comfortably, and I learnt to cook on an old Aga (imagining myself as Maizie, or any Village woman from Stonewylde).

We had a week of bliss, with no mobile signals, no computers or horrid games consoles that obsess all our sons constantly, and very little Outside World at all. There was a beautiful lake just for us, with canoes and coracles, and the hardiest children even swam in it. We played table tennis, badminton, croquet and pool, and jumped for hours on the trampoline. Maybe we were slightly more Hallfolk than Villager, now I come to think of it! But it was great.

Two of my sons took me for a walk in the glorious countryside that surrounded us, especially to find some hares, which they’d previously spotted. I was in heaven – as many of you know, hares are very special to me. We saw two, and one of my sons got very close to one of them as he lay hidden generic phentermine online behind a tussock of grass trying to lie low until we’d gone. Then he raced out at full pelt and ran across the field – watching a hare in full flight is an awesome experience. Mr B and I think we saw an otter in the lake too, although it was only a glimpse so impossible to be sure.

I’m now returned from the holiday very happy and refreshed (although somewhat “cooked out” – coping with ten hungry people for a week was quite demanding for someone who is most definitely not a domestic goddess!) but best of all, I’m back into the Stonewylde mindset again. Many of you will know that Book Four is actually already written, although does need a good polishing and tidying up. But I need to write Book Five before I go ahead with finishing off Book Four as there may be things that need tweaking. I was all fired up to start Book Five when we had the burglary and my laptop was stolen. This really set me back – not just the lack of laptop, but the whole trauma of being broken into at night-time while we slept. My creativity just vanished.

However, after this amazing holiday in such a very special place, it’s returned. I spent about five of the eight hours’ drive home, in our hired minibus, at Stonewylde. Poor Mr B was totally neglected as he negotiated traffic and hold-ups, because I was completely away in my head. So good news for all fans who’ve been asking repeatedly about Book Four, as this is a major step forward now.

Tonight Mr B and I are visiting Stonehenge for a special access visit inside the circle for the full moon. I’m kind of expecting this to be the final thing to push me back into that creative space where I can write again. What could be more magical than to stand in such a sacred place and watch the full moon? Moongazy blessings to all!