Way back in February at the fabulous party in the Natural History Museum (there’s a blog about this in Feb’s archive) I met fellow Orion author Essie Fox. I’d bought but not yet read her debut novel, a Victorian Gothic tale called The Somnambulist, and we had a chat, agreeing to read each other’s books soon.  Our paths crossed again when we learned that Orion had given us both the same freelance PR lady (I think we also share her with Gregg Wallace); Essie and I decided to meet up in Windsor for coffee.

Essie is a beautiful, tiny woman who appears to have stepped out of one of her own novels.  She seems almost incongruous in 21st Century dress, and so it was wholly appropriate that when I next saw her in the Strand at the launch party for her second novel, she was dressed in black silk and crimson lace. Sadly I don’t have a photo, but the book in question – Elijah’s Mermaid –  looks stunning too and I can’t wait to read it.

It was a fantastic launch party, and great to see the familiar faces of some other authors: Julie Cohen from Reading who writes romance, erotica and other good things, Shelley Harris, author of Jubilee, whom I’d also met at the Orion party, and Emma Darwin, author of The Mathematics of Love and Secret Alchemy, whom I’d met at an historical fiction day at the Weald and Down Museum. I also caught up with my publicist, Emma Dowson, and Kate Mills, an Orion editor whom I’d long wanted to meet.

And then a very exciting thing happened.  There across the crowded room I saw the most famous and important literary agent of them all – the legendary Carole Blake!  She runs the prestigious Blake Friedmann Literary, TV and Film Agency and is renowned for her incredible prowess in the publishing industry.  She’s an author herself of the the seminal work From Pitch to Publication and her achievements are far too numerous to list here, but her profile on the company website is here.  I wanted desperately to say hello, and in the end plucked up the courage to go over and introduce myself.  I was very nervous as she has the reputation for not suffering fools gladly – and I certainly felt like a gibbering fool!

Would you believe this lady has been working in publishing for 49 years?  No, I couldn’t either – I thought she was my age!  She was charming and friendly and we chatted for a while. Carole asked what I did, and I told her how I’ve now finished my Stonewylde Series and will soon start research for a new project – a novel set in Dorset during the Civil War. Immediately her eyes lit up and she started to tell me about a marvellous book set during that period. It sounded absolutely fascinating and I promised to read it, guessing that she must represent the author.

I can tell you that John Saturnall’s Feast, by Lawrence Norfolk, is the most amazing book and I enjoyed it immensely. It’s historical literary fiction and so multi-layered that it positively drips with richness and flavour. Its focus is food: feasting and fasting, fecundity and famine. I adored the culinary detail in the book, but more than that, I was entranced by the underlying themes of nature’s wild abundance desecrated and plundered by Reason; of witchcraft flayed by religious zeal; of plenty laid waste by wantonness. The sensual delights of feasting and the masochism of fasting are explored, with abstinence and self-denial at one end of the table, indulgence and hand-feeding at the other. 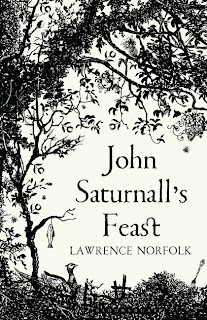 When Carole recommended this book to me, how would she have known of my interest in natural magic? As I read the descriptions of the woods, the gardens and the Somerset Levels with the Tor in the background, my skin prickled with understanding. I loved the book and despite its depth and literary lyricism, I read it very fast. This was just as well, because I saw one of Carole’s posts on Twitter (she’s very prolific) about a forthcoming event in Bloomsbury where Lawrence Norfolk would be talking about the book! I was so excited and immediately snapped up a ticket.

It was a great evening. The Bloomsbury building is wonderful, very different from the Orion office block which is ultra modern. Bloomsbury is as you would expect, old and grand. I was hoping to see Carole again but anxious not to be a pest, and I’d brought along my copy of the book to be signed. After signing hundreds of copies of Shaman of Stonewylde since its launch in October, it was strange to be on the receiving end for a change. I was delighted to get the chance to chat to Lawrence over a glass of wine before the talk, and I asked him if perhaps he’d been inspired by John Keats’ poem The Eve of St Agnes. I reminded him of the gist of these lines:

“While he from forth the closet brought a heap

Of candied apple, quince, and plum, and gourd;
With jellies soother than the creamy curd,
And lucent syrops, tinct with cinnamon;
Manna and dates, in argosy transferr’d
From Fez; and spiced dainties, every one,
From silken Samarcand to cedar’d Lebanon.
These delicates he heap’d with glowing hand
On golden dishes and in baskets bright
Of wreathed silver: sumptuous they stand
In the retired quiet of the night … 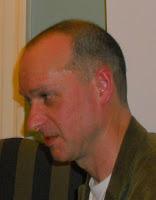 I’d felt other parallels between the book and poem too, but Lawrence laughed and said that although he’d studied the poem for A Level, it hadn’t been a conscious influence when writing the book. We then talked of how, as a writer, one is influenced by every single thing ever read, seen or experienced. I explained how I was worried that now I’d read and loved his book so much, I may inadvertently mirror some of it when I write my own novel set during the same period. Lawrence laughed again (he’s a very jolly fellow) and promised not to sue me for plagiarism! 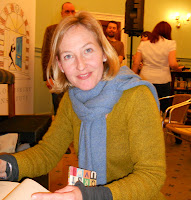 The evening’s talk, The History of English Food, was organised by Bloomsbury Cooks and was actually a conversation between Lawrence and fellow Bloomsbury author and food writer, Kate Colquhoun. Her most recent book is Mr Brigg’s Hat: A Sensational Account of Britain’s First Railway Murder but she was here to speak about her highly acclaimed book Taste: the Story of Britain Through Its Cooking. It was first published in 2008 and apparently helped inspire John Saturnall’s Feast, despite the fact that the chapter on food during the Civil War is the shortest, and Kate’s least favourite!

Kate and Lawrence are friends in real life, and this came across during their fascinating discussion. Lawrence spoke of the difficulties of describing food in intimate detail. The appearance and aroma are reasonably straight forward, but how to describe taste? There aren’t that many words once you’ve used up salty and sweet, and besides, he said, it’s like writing about sex – there’s nowhere for the writer to be. Where are you, the author, in the scene? On the tongue? In the gullet? I immediately thought of the Numskulls in the old Beano comics. Lawrence was very funny indeed, although when I asked during Q & A time if he’d cooked or eaten any of the very exotic dishes in his book, he said that sadly he hadn’t. Shame! I’d had visions of him facing up to shivering blancmanges and quaking puddings, roasted quails inserted in the breast of a swan and nesting on woven spinach stems and other such concoctions.

Kate’s passion for her subject shone through and she spoke very entertainingly about food throughout the ages. I was lucky enough to get one of the four remaining copies of Taste (currently being reprinted), and was delighted when she signed it for me. I know I shall use this as a reference book and can’t wait to read it.  Lawrence signed my own copy of John Saturnall’s Feast and another one I bought for a friend for Christmas. And the lovely man even asked about my own books! 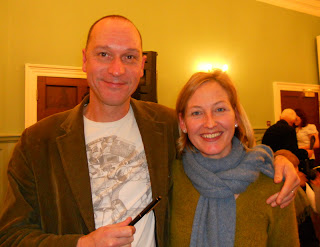 It was a really enjoyable evening and even though I was succumbing rapidly to a cold, I returned to Reading with a warm glow, feeling very happy indeed. It was also a pleasure to meet and sit with Cheryl Cohen a food writer who works with London Farmers’ Markets. She’d come to hear Kate talk, but after my wild enthusiasm for Lawrence’s book, she bought that too. I hope she enjoys it as much as I did.

Many thanks to Carole Blake for recommending John Saturnall’s Feast at Essie Fox’s party. Not only did I love the book, it also affected me deeply. I’ve been dreaming of it; always a sign that ones subconscious has been stirred.  I’m haunted by images of John and his mother in Buccla’s Wood, foraging to survive during the depths of winter, desperate to escape persecution by the zealots. It’s as well that I’m not yet ready to start writing my own Civil War story for I’d certainly be influenced by this powerful novel. Lawrence may not mind a bit of plagiarism, but knowing of Carole’s fierce care for her fortunate authors, she’d certainly have something to say about it.  And I would always hope to be on the right side of Carole Blake!