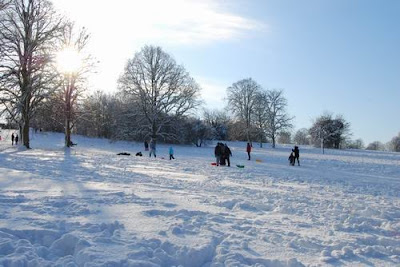 Fun in the park 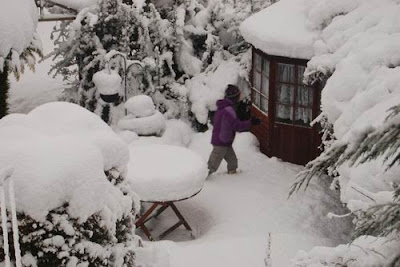 Trying to get to the shed to find the spade – guess what happened when I opened the door!
Can you see my wellies? No – snow is too deep! 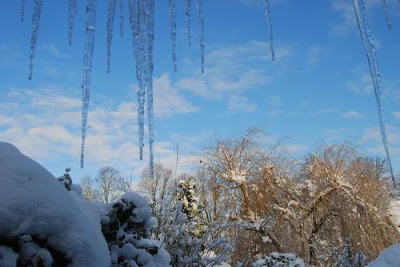 Icicles and snow from our kitchen window 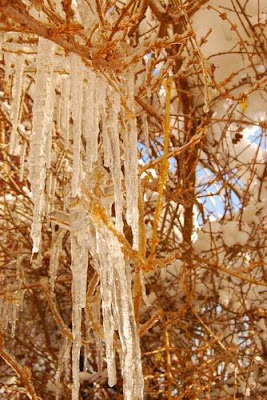 Icicles in the forsythia

I noticed that in 2009 I made 51 blog entries – on average, almost one a week in fact! Sadly though my last entry was well over a month ago and I’m sorry to all those who read my blog about this long silence. I came back from the Schumacher College very happy and excited, and feeling spiritually energised. But less than a week after writing my last post, Mr B and I had a sudden and very shocking family bereavement.

I think the year 2009, for all its good things (of which there were many), will remain in my memory as the year of bereavement. I lost three people whom I cared for very much, one after a long and dreadful bout with cancer and two completely unexpectedly, though through illness rather than accident. If nothing else, 2009 taught me a lesson about human frailty and confirmed more than ever my beliefs about living for the moment and savouring every drop of life. It also reminded me how vital it is to appreciate our friends and family and not take their existence for granted. Life is precious and love even more so, and both should be celebrated and appreciated. I hope I remember this lesson in the next decade and act upon it.

We spent the Winter Solstice at the funeral, which in many ways is fitting for the darkest day and longest night of the year. It was cold and icy, and the sense of death and withdrawal from life was very powerful. But it was also a time of family love and warmth, of gathering in the cave as a tribe with the coldness and terror kept at bay outside, and Dec 21st was a time of great healing of old hurts and wounds and a chance to bury the remains. We drove home feeling sad but positive – and then hit the first big snowstorm. Wow! It took us several hours to get home, and eventually we abandoned the car in deep snow and walked the last three miles back at 1.30am!

Yule was a lovely purchase phentermine online cheap time, despite the sadness of loss, of gathering with family and friends, and then Mr B and I travelled to Brittany to spend New Year’s Eve with friends. The Blue Moon was beautiful, glimpsed on and off during the evening through snow clouds. A truly magical time and one which filled me with hope and excitement for the coming decade. New Year’s Day, 01.01.10, was bright and frosty, everything dusted with sparkling snow. Mr B and I walked amongst some local standing stones, Cordon des Druides, which I think I mentioned in a summer blog. That was a very exciting way for me to begin this decade and I feel that on a personal level, 2010 will be a wonderful year.

That night the skies were clear, and with no light pollution the stars glittered brilliantly. We watched the almost-full moon rise, golden and bright, behind the trees. Later, when it was high and silver, we lit sky lanterns and as they sailed off above the frosty fields, all of us there felt an immense uplifting of spirits and sense of anticipation for the year and decade ahead.

Since returning to England, we’ve spent the past week buried under un-heard-of amounts of snow. It’s been lovely having Mr B working from home. I’ve spoken to people in my street for the first time since moving here over 18 months ago! The camaraderie when one is shovelling snow and “skating” to the local shops is wonderful. I’ve been amazed at the beauty of the cold snowy weather – particularly the icicles. Sadly today the thaw has at last set in and it’s grey and dripping outside. And lonely without Mr B.

I have lots of New Year’s Resolutions, one of which is to blog weekly. Another of which is to keep up with e-mails the day they arrive if possible (I have a back-log from November and beyond – really sorry if you’re still waiting for a reply and maybe try again?) but certainly by the end of each week. But the most important one is to value the precious gift of life – both my own and other people’s.

Bright blessings for 2010 to all of you who read my blog and everyone who’s enjoyed Stonewylde. Let’s hope it’s a good one full of wonderful things!